Not a Crime for 30 Years #IDAHO in Northern Ireland #LGBT 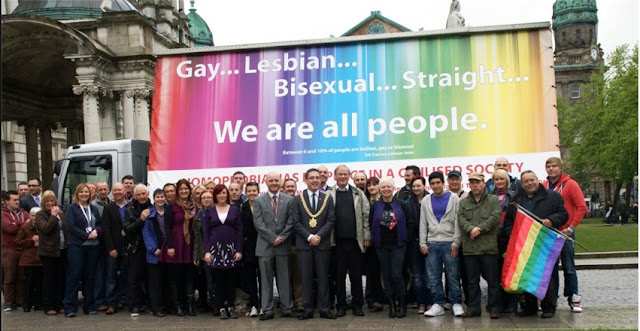 Earlier today I  was at City Hall in Belfast and then later at St. George's Church for highlighting IDAHO (International Day Against Homophobia and Transphobia).

This was because of a five year case through the European Court of Human of Rights brought in the name of Jeff Dudgeon against the United Kingdom, and the subsequent debate on the Homosexual Offenses (Northern Ireland) Order 1982. As the keynote speaker of the day we had Jeff himself telling of the history leading up to that historic start of gay civil rights legislation coming in for Northern Ireland and he and others brought us up to speed as to where we are now.

One things of note in the 1982 debate is the language used and votes made by the Northern Irish members in the Commons. As was pointed out our local politicians have yet to bring any substantive home grown LGBT legislation into being, even civil partnerships came about because the Assembly was in suspension at the time and came to us via Westminster. We have MLAs and minister who are dragging their heels even today on the Sexual Orientation Strategy, on adoption of non-married couples because there is a L&G element as must as the heterosexual element, on the men who have sex with men blood ban, or equal marriage.

It was pointed out that while there is some progress in our political parties there is almost a built in veto in this area from one of our parties at Stormont. A lack of interest, lack of action, lack of coming to a decision that is making it hard for LGBT groups and advocates to take any stance because there is nothing to oppose except inaction.

It may be 30 years since homosexual acts were lifted from the criminal statutes here in Northern Ireland but we still have some way to go with equality. We are lagging behind the rest of the UK again because of this inaction on the part of some of our politicians. Some may table questions, but so far no home grown legislation has be brought forward in the area of LGBT issues. Even in the so called draft programme for Cohesion, Sharing and Integration what was evident was the omission of sexual orientation along with other minorities in a document that dealt only with sectarianism and racism; and then only to manage not to move away from this.

We are people. We are voters. We are Northern Irish and we can't be swept under the carpet any longer via antiquated 19th Century laws brought in when the island was united under Westminster rule. We need politicians who are able and willing to bring Northern Irish legislation into the 21st century using the facts to hand today not the preconceptions of the past that in some cases seem not to have moved on from this debate, apart from change in language.
Posted by Stephen Glenn at 23:29