After yesterday's team trial which saw Taylor Phinney, then in the Maglia Rosa (pink jersey) take an excursion off course through some long grass and saw all three of the men most closely affected or involved in Monday's crash start. We have probably the most straight route I recall for any road stage of a Grand Tour. 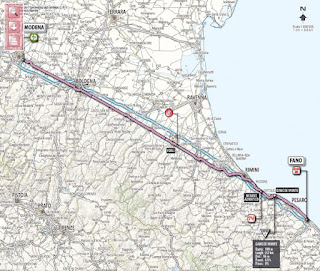 From the start at historic Roman colony of Modena we go straight and flat to Rimini on the coast. Then following the coast around to Fano for the stage finish there few bumps in the road, but only one warrants a category four rating.

The final 10km are flat and straight leading into the finish itself. So expect another sprinters finish.

I would say without any bends in the final few kms this should be an uneventful run in but after Monday and the crash on the straight I won't be so bold. What I do hope is that the sprinters do race a fair sprint and keep largely to their sprinting line. Because although Fano is mentioned in Dante's Inferno I want all the fire to merely be in the explosive finish and not a hail of angry words, tweets, press interviews after the event.

So as Lithuanian cyclist Ramanus Navardauskas wears the Maglia Rosa there is added incentive for team Garmin-Baracuda sprinter Tyler Farrar to win today. The time bonuses would lift him into the leader's jersey, but I expect that both Mark Cavendish (SKY) and Matt Goss (OGE) will have something to say about him taking the maximum time bonus when it comes down to it.
Posted by Stephen Glenn at 12:23