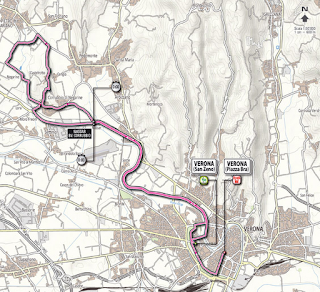 After the crash at the finish on Monday we head to Verona for the Team Time Trial today. The big focus will be on three of the riders.

First of course there is Taylor Phinney who managed to cross the line on Monday and although it looked worse than it turned out only required three stitches on his ankle as there was no breaks. But his team BMC may have to lose the Maglia Rosa (pink jersey) if they have to nurse him to the line there is only nine seconds over Geraint Thomas of Team Sky one of the favourites for the Team Time Trial, while Alex Rasmusen of Garmin-Barracuda one of the other favourite teams is another 4 seconds back. How well rested Phinney's ankle is may well determine the pace at which BMC go around the 33.2km course.

Next there is the riding rash on the left hip and shoulder of world champion Mark Cavendish. He may be a sprinter but he likes to take his turn on the front in team time trials, in fact he was also riding tempo at the front on stages of the Tour de Romandie last month as that was not a sprinter's tour.Watching to see how well he rides this stage will let us know just what sort of shape he is in after hitting the road on Monday and having some other bikes ride into him as he was prone in the middle of the road. If his team can take enough time out of BMC and not lose too much or even open a gap on Garmin-Baracuda Welshman Geraint Thomas may be in the Maglia Rosa at the end of the day.

The final gentleman of Verona is Roberto Ferrari. The 21-year-old Androni Giocattoli-Venezuela rider has been defiant about his action on Monday, saying:

"I made my sprint. I was on my course. I was in front of him [Cavendish], I don’t care what happens behind me."

"Riders shall be strictly forbidden to deviate from the lane they selected when launching into the
sprint and, in so doing, endangering others."


This is what  Ferrari did, his words above may contravene rule 2.2.010 (below) because that does indicate that care is required to be exercised.


"Without prejudice to the disciplinary penalties provided for by the regulation, a licence holder (rider) or a team may be excluded from a race if he/it seriously blemishes the image of cycling or of the race. This exclusion can occur before or during the race."

We shall see if Ferrari does start the race today or if he has been excluded.


The Route for the Time Trail itself takes the teams out to near Pedemont and back again. It starts at Porta san Zeno and returns to finish on the cobbles in the historic Piazza Bra with its Roman amphitheatre.


We may seen a change of ownership of the Maglia Rosa, but I fully expect BMC and Taylor Phinney to not give it up without a fight no matter how much pain he is in.