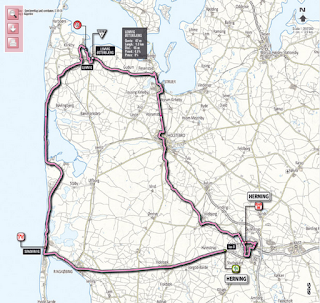 Today the Giro d'Italia will run along Denmark's North Sea coast as it goes from the town of yesterday's time trial, out to the coast, then north to Lemwig, then south again through Hostelbro to Herning once again.

While it is a flat stage there is the potential for the cross winds off the North Sea to cause a split in the race. But even the inland run back to Herning offers little protection to the potential of wind. But if Sky can protect Mark Cavendish he is likely to be able of winning his 8th stage (sixth individually) in the Giro.

This is a sprinters stage so after the struggles he had to get a sprint finish in the Tour de Romandie expect Mark Cavendish to chomping at the bit to get a win under his belt in the rainbow jersey, which he's hoping you will not see again until the start of the Tour de France as he attempts to win the sprinters jersey in this Grand Tour to go with the one he won in Paris last July.
Posted by Stephen Glenn at 09:00