So Donald Trump having seen the majority of NFL players take the knee, link arms or not appear on the field and run a weak D*.

He has tweeted (what else) the issue of kneeling has nothing to do with race. It is about respect for our Country, Flag and National Anthem. He tweeted this immediately after the tweeted that some fans booed during the National Anthem at those same players.


Now let me get something straight here:

Taking the knee is something those that serve the Country and Flag do to show respect. Respect to fallen comrades.

The take the knee movement that started last pre-season in the NFL after a summer in which a number of innocent African-Americans were shot by white police officers. It started with one player and has spread, this weekend including Baseball and with the backing of other sports.


Also during the civil rights movement in the 50s and 60s taking the knee was non-violent protest of people praying and contemplation.

So Mr Trump is ignoring history and ignoring reality if he says taking the knee has nothing to do about race.

But here's another thing what about those players who didn't take the knee. Many of them this weekend stood behind and beside their team mates. Instead of hand on heart as normal many of these linked arms. Just like this: 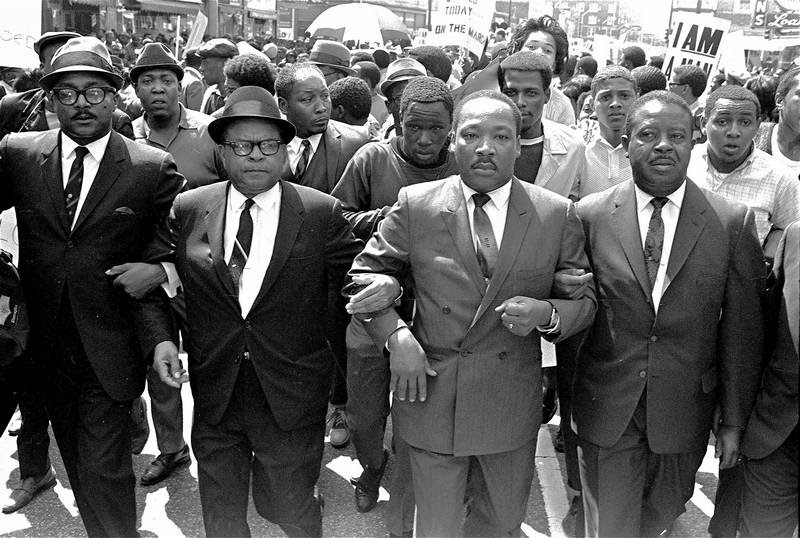 Yes as Martin Luther King Jr and others marched to Selma they too linked arms in the same way. The symbols that teams across the NFL showed on Sunday from London to LA have everything to do with race. The continued racism of some and oppression of black America.

Some of those who have song the Anthem in recent weeks have also started to take the knee. So you can sing the Anthem showing you love for the nation and still protest that the America you want can be better, can be greater.

Now back to those who booed the plyers who took the knee. A lot of this happened during the national Anthem. Not a peaceful protest but a verbal one. Surely that is disrespecting the flag, country and anthem.

So Donald if you truly want to make America great you have to do so for all Americans. You have to respect all the cultures that make up the culture of America. Respect those who exercise their freedom of speech as enshrined in the Bill of Rights to protest peacefully, even if that protest is against you. Indeed you should defend their right to protest, even if you disagree with what that say as long as they do it in a peaceful, non-violent way, even if that protest is aimed at you. That Mr President is democracy. That Mr President is the land of the brave and the home of the free.

If you respect their rights as enshrined in the Bill of Rights maybe then you will show the respect to your office that is yours in passing.


*Defence for non-NFL fans
Posted by Stephen Glenn at 18:45 No comments:

Yesterday in her Florence speech Theresa May said:

I beg to differ.

I sitting writing this in the house that my parents moved into in 1979 on the day of the first UK elections to the European Parliament. So even from then I new about Europe and that it was a part of our lives.

I went to University in Kingston at the end of the 80s and took as one of my options in both 2nd and 3rd year European Economics. It became something of a speciality of mine and my fellow students would often come to me if they needed to know how the mechanics of the European Union, Schengen Area, or then the exchange rate mechanism pre-Euro worked. I even had the horror of listening to parliament on the radio one evening while finalising an essay on our place in the EU on the day of the Maastricht Treaty debate and had to amend my argument slightly and quote from that debate before handing it in at 12 the following day.

I like many others have enjoyed fast access to the EU nations, especially when compared to those non-EU (or now EU) ones that I have also experienced whenever I go to continental Europe, whether for holiday or work. Indeed I have two wallets my every day one which contains Sterling or my other one for days trips to Dublin or Donegal and longer trips to the continent that contain Euros. You see I never change my Euros back into pounds as I know they will be used again at some point.

Indeed my stamp collection of Olympic stamps I base on a Euro price as a lot of the dealers that I purchase from on Ebay are based in Europe so I have to know if I paying a fair price for the items I am purchasing. When you are looking for the remaining 5/6ths of the worlds Olympic stamps that can be important for a Philatelist. With either the Euro, Sterling or US Dollar there are only three currencies I deal in both to buy and sell.

The job that I worked in while I lived on Edinburgh for 10 years would not have existed without us being integral in Europe. When you have working in a multi-lingual, Europe-wide support environment with EU nationals doing skilled work alongside you, you know you are an integral part of Europe. That is why I suspect London voted heavily to remain out of all the areas of England because they like me feel an integral part of Europe in their workplace, leisure time and neighbourhoods.

So Theresa May while you have spent you're working life in the Westminster bubble and maybe therefore think you have not been an integral part of the EU. Remember those times you passed laws to make our law, products, even our currency compatible with the rest of Europe. Europe has been an integral part of my entire life of now 48 years so don't throw it all away because people from your generation don't realise how integral it is. The reason you have yet to come up with creative ways to deal with Brexit is because of how integral Europe has become in our live not because it hasn't.

Your Brexit means Brexit argument that we have to come out of Europe completely is like a heart and lung transplant. The only problem we are facing is that even with your 2 year transition period while the UK is on a ventilator we have no organs yet to replace the European heart and lungs that are in the UK you are about to remove.
Posted by Stephen Glenn at 09:26 1 comment: