All over the weekend the people of Derry/Londonderry have be scouring the banks of the Foyle searching for the body of Jack Glenn the Grandson of one of my dad's cousins. Today also marks the tenth anniversary of my father's death. About this time 31 years ago I very nearly did what Jack Glenn did and end my own life by jumping into freezing cold water. While the reasons 31 years on are different the depth of the individual's despair is something that resonates on.

Seeing the love extended to and the grief experienced by members of my expanding family makes me glad I didn't become another statistic in some data base to some. But a deeply regretted loss to those nearest and dearest to me then, and the new ones who have joined our family since.

Today in the House of Commons the MP for Strangford, Jim Shannon said:

"We must also allow teachers who are uncomfortable discussing and promoting British moral values that might undermine their own dearly held personal faith to withdraw from teaching those values, with no penalty and no fear of losing their job. We have many examples of that.

"There is the example of Ashers in Northern Ireland. We have the case of the bed and breakfast owners and that of the Christian registrar. It is not enough for our Prime Minister to talk about freedom to live one’s faith; we must now have the support of the law to do that. Any legislation must protect the right of teachers to withdraw from promoting values that undermine their faith."


Sure Mr Shannon you want those who are Christian teachers to not tell children than being gay is OK. Well those 31 years ago I was a student at the largest secondary school in your constituency. I was coming to terms with being gay but did not know who I could talk to about it. You see the thing is like so many other LGBT+ teenagers in Northern Ireland through the years I came from a Christian family. I didn't know where to turn to and at the time I didn't know that there were other people struggling the same struggle as me.

If only someone had been able to tell me at that point that it was ok to be gay. I wouldn't have been suicidal, looking for a way out of a conflict that was going on inside me. Indeed you know what was worse. It wasn't that long before that time that the DUP were telling me they wanted to safe Ulster from Sodomy. Some of them even said that we should lock up people for being gay. I was still a virgin and feared for my freedom, my ability to find love.

So Jim Shannon is quite prepared to defend the jobs of Christian teachers, but isn't let those same teachers express Christ-like love that is needed to make people feel accepted and possibly not consider suicide as an option. Is there not a moral code about loving everyone, about trying to stop people from killing themselves, showing them love, understanding and even sitting and eating bread with them.

WWJD, doesn't stand for "what would Jim do?" it stands for what would Jesus do and I know it was him who turned me around from staring into that abyss where I contemplated taking my own live and then showed me that he still loved me. I believe that Jesus wants the Christians of Northern Ireland to get alongside the LGBT+ young people and show them love, not judgement. Show them compassion not condemnation.

Northern Ireland needs inclusive age appropriate sex education. We can't leave it to families who may be as anti-LGBT+ as the DUP are, as they make the entire church out to be. If we do many other will take their own life.
Posted by Stephen Glenn at 21:49 No comments:

Identity - my choice, my right, my decision

Yesterday I posted a tweet in light of the Article 50 vote in the House of Commons.

As I live and was born in Northern Ireland I have the right under the Northern Ireland Act to identify as British, Irish or both. On legal form for the last 19 years (including the last 2 Census forms) I have identified as British and Irish, sometimes having to fill in other when the option was not open to me in the non-Northern Irish forms to choose that option. 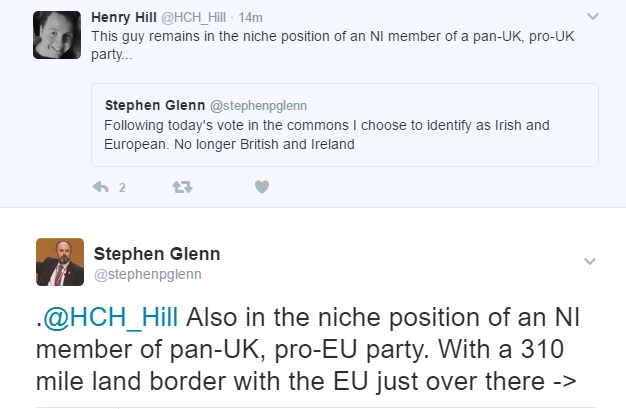 As you see from my first response I took exception to this. But it soon escalated.

Mr Hill soon declared that I had disowned Britain, ironically he had claimed it was an over-the-top smear. Strange when all I had done what chosen how to identify as was my Westminster given right as a subject/citizen in Northern Ireland.

He then went on to claim that I was trying to break up the United Kingdom. Claiming I was anti-Lib Dem in not being pro-UK. I responded by referring him to part of the preamble to the Liberal Democratic constitution.

We therefore acknowledge their right to determine the form of government best suited to their needs and commit ourselves to the promotion of a democratic federal framework within which as much power as feasible is exercised by the nations and regions of the United Kingdom. We similarly commit ourselves to the promotion of a flourishing system of democratic local government in which decisions are taken and services delivered at the most local level which is viable.

But he insisted that I should ignore the fact that in the debate James Brokenshire the Secretary of State for Northern Ireland has promised there would be no special status for Northern Ireland. Or that he and Theresa May have ignored evidence to the Northern Ireland Affairs Committee that their fiction of a frictionless, custom free border with Republic of Ireland cannot exist as out side the EU and any part of it there are things like outside EU taxes and duty that have to be considered. Trust me the fall in the price of Sterling affected my monthly underwear delivery yesterday from Australia add £11.58 to a £17.60 order!!

The ones who are breaking up the UK are the ones who have ignored the reasons that many voted to Remain in Scotland and Northern Ireland. In Scotland many voted to remain in the UK only because of uncertainty over whether an independent Scotland would be able to benefit from EU membership, with that gone they may now vote for Independence, The majority in Northern Ireland probably along with London are two of the most entwined areas of the UK with the EU. They knew the complexities that faced them personally and those around them. They knew how enmeshed a lot of what happened in their areas is with the EU and to untangle it would be a never ending puzzle and certainly not something that can be done successfully within 2 years.

To be clear I've never wanted to see the UK break up. But I'm living in the reality of the situation. My UK passport has lapsed and I'm not minded to renew it at this point anyway as it will need to be renewed again after Brexit, so I am down to one passport my Irish one. This also allows be greater freedom to travel within Europe and in a few years time I'll be one getting the coffees in at the other side of customs while I wait for my fellow Brits to join me.

Of course Mr. Hill can spout his alternative facts about me. But those who have known me, know I'm proud of all aspects of my heritage and have done all I can to keep them all together. But yesterday as Jacob Rees-Mogg said it was a turning point in British history, sadly I don't see it in the glorious terms in which he wants to frame it.