Dear all, An Apology - My part in Brexit - ALLEGEDY

According to Charles Moore (in yesterday's Daily Fail)  the UK would not have voted for Brexit if David Cameron had not forced through Same Sex Marriage. So of course this would not have happened if Lynne Featherstone had not raised the issue even though it was not in the coalition agreement.

But Lynne wouldn't have been able to raise it in cabinet had it not been Liberal Democrat policy after it adoption at Liberal Democrat conference in Autumn 2010. However, it also might not have been Federal Policy had not the Scottish party passed it as policy at their spring conference that Spring. It is for that first ripple that today I issue my apology and my part in our nation's downfall.

When Kieran Leach and I were researching the issues surrounding Same Sex marriage ahead of drafting the motion to conference an exit from the EU did not seem to have been an issue. At that time Belgium, (since 2000), Netherlands (2001), Spain (2005) nor Sweden (2009) had shown any inclination of leaving the EU as the result of their passing Equal Marriage legislation. It was also not an issue that the couple of speakers against the motion at that Spring Conference in Perth failed to raise as a consequence of what we were proposing. If we have missed out on some great piece of research that Charles Moore is privy to which states a correlation between Same Sex Marriage and exiting the EU we can only apologise.

As there is now a clear causal influence of being unable to remain within the EU and the passing of equal marriage or same-sex marriage legislation Kieran and myself can only apologise to the people of Belgium, Netherlands, Spain, Sweden, Ireland, Portugal, Luxembourg, France and Denmark for their impending exits from the EU family. We would also ask Finland to carefully reconsider their agreement to introduce same-sex marriages on 1 March 2017 if they want to remain.

We just did not that the flapping of this butterflies wings could be so catastrophic.

PS Please take all of the above with tongue firmly in cheek.
Posted by Stephen Glenn at 14:57 3 comments:

Taking Control of What?

This morning Nigel Farage declared the 24th June our Independence Day. But what does that mean?

All though the campaign and indeed for the last 25 years against rising Euroscepticism I have said we need to be in the EU not outside it Now that we have stepped outside it may be sometime before some realise what is missing so here is some things that I have been pondering today.

1. Our EU deal won't be gold standard. The United Kingdom are about to become the first nation to use the Lisbon Treaty to walk away from the EU. Do we really think that a majority of the other 27 are going to want to see that repeated? Not bloody likely.

Indeed all through the campaign the Brexiteers have told us that leaving will have no affect on our ability to live, study, work or retire in Europe. It won't lead to increase costs and tariffs on our trade with the EU etc But there is no way the 27 remaining members of the EU are going to give us all the benefits that come with membership having walked away. If they did it would encourage other nations to walk away with a good deal and there would be no point of being in the EU at all. Farage said he wanted to bring down the EU, now the EU have the power in their hands to bring down the UK.

2. There is a sharp divide in components. The Kingdom in no longer United in Scotland every single local authority voted remain. Nicola Sturgeon had already said that a new Independence Referendum is on the table and Scotland had been assured by the No team that being part of the EU was only guaranteed if they voted against Independence in 2014. Being taken out of the EU "against their will" has changed the constitution question in Scotland and many who voted No may now feel that leaving the UK and negotiating to enter the EU before Brexit is final is now more attractive.

Then in Northern all of the areas next to our European land border, plus three of the four areas in Belfast and North Down all voted the remain In most of the others which are Unionist strongholds it wasn't a clear vote leave. The Northern Ireland Act itself is so enshrined in being part of the EU and its constitutions that it will need to be redrafted, and then reapproved by referendum. For many the easier option may be to ask a different question. To remain under those European protections by reuniting a nation state for the second time in EU history following on from German reunification.

Martin McGuinness the Deputy First Minister has said "The British government now has no democratic mandate to represent the views of the North in any future negotiations with the European Union and I do believe that there is a democratic imperative for a 'border poll' to be held."

3. London may lose its financial clout. The other region with a good vote Remain by a margin of 60-40 of course this is the financial centre, but a lot of the banks operate across borders and London is not just the UK financial centre but also a European one. Already some financial institutions had been relocation divisions within their organisation ahead of the poll to hedge against the result that came to be in the early hours. Others have intimated in the lead up to the poll that they will consider their position once the vote was known, so Nigel Farage's nice friends in banking may well be deserting him to head to Europe.

We have also already seen in the hours since the result became clear the pound fall to the worse level since 1985. I bigger single day drop in share prices that even Black Wednesday, which has a knock on effect to pension funds. Government bonds rating go from secure to negative. And a run on dollars and Euros, plus a upsurge in the price of gold (never a good sign as this is deemed security).

4. The EU want us out.... quickly. Within hours of David Cameron setting his own timetable for the separation to start in October the European Commission President Jean Claude Juncker has said, "Britons decided yesterday that they want to leave the European Union, so it doesn't make any sense to wait until October to try to negotiate the terms of their departure - I would like to get started immediately."

The leaders of the 27 nations are going ahead with a planned meeting on Tuesday, David Cameron was initially meant to be there to discuss the way forward, we are already outside of the room as far as decisions about our future are concerned.

Last night during the Sky News paper review at 10:30 (it wasn't repeated at 11:30) Owen Jones, who is someone I admittedly don't always agree with tried to make the point that the attack on the Pulse Nightclub in Orlando was a direct homophobic attack. In a heated exchange in which Mark Longhurst the host and Julia Hartley-Brewer tried to down play the homophobic element of the attack Longhurst said "you don't have ownership of this horror cause you're gay." 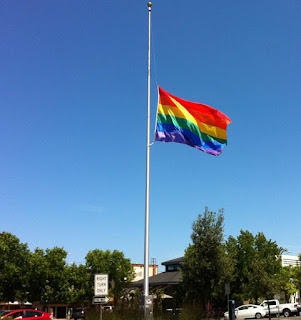 If ISIS are throwing people some as young as nine off buildings in the areas they control for believing them to be gay, and they are carrying out attacks in the west, who might they attack here? Well of course one of the worse fears is that someone would claim to attack a gay venue or event in the name of IS. This is what happened in the early hours of Sunday morning and it is now the worse mass shooting in American history. So yeah the LGBT+ community can see that Owen Jones was right this was an attack on LGBT+ people. It was the realisation of our worst nightmare write large of the situation in our world today.

Julia Hartley-Brewer dismissed the attacked as "mad and bad" or as a "lunatic" bit for whatever reason he drove 90 miles and had premeditated to carry out this atrocity. The use of such words do not reflect what happened. This was someone with a seriously different world view to the established liberal, western mentality, even more so that the small c conservative mentality. But there are other people with a similar mind set out there who may well be planning something similar: a similar act to instil terror in the LGBT+ individuals.

In other words an Act of Terrorism against the LGBT+ communities.

Yet Sky News chose to mock the use of those words from someone who identifies as a gay man, someone in tune with the fear that is flowing out there amongst LGBT+ viewers. They negated the sense of terror that many LGBT+ people had heightened as a result of this attack, the mocked it in a way which is in itself homophobic in nature by ignoring the real concerns of all those individuals and merely seeing this in their own eyes.

It is therefore not surprising that I see that the segment which even Sky had deemed that they could not repeat has gone viral for all the wrong reasons.

Posted by Stephen Glenn at 09:38 No comments: 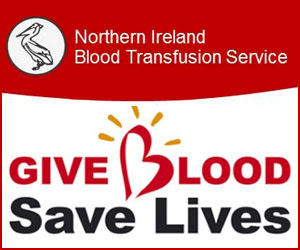 The last time I donated blood was on Monday 17th August 1998, I did so illegally because as a man who'd had sex with a man I wasn't totally truthful on the form. But it was two days after the Omagh bombing and blood stocks were low.

However, 18 years and 2 weeks on I will be able to give blood again and this time fully legally providing I don't have any sex with another man in the meantime. This is because today Northern Ireland's new health Minister Michelle O'Neill announced that science and not stigma would be the guide by which those making blood donations would be tested.

It is the end, within the UK, of a campaign I have been involved with for much of the 18 years since I last donated. It is one of the steps for LGBT+ equality that are needed for me as a Northern Irish gay man to have a civil worth that equates to the self worth that I took many years to come to terms with myself. There are still many more fights to be won but this a welcome one and one we haven't had to reach through the courts (although there were court cases pending on this issue).

So roll on 1 September, I look forward to digging out my 28 year old donation booklet to add new confirmations of donation.
Posted by Stephen Glenn at 22:25 No comments: