The Impossibility of the Prime Minster's Answers #Brexit #NorthernIreland

Today the Answers given to some of the Prime Minister's Questions did not seem to be logical however they do cast some idea of the shape that Brexit will take.

From the answers we received today we have learnt the following:


A lot of this was in relation to the draft proposal to keep Northern Ireland in the customs union and single market. If as Boris said yesterday it would be possible to control the NI border as easily as between Camden and Islington this would be that easy peasy lemon squeezy option. As there would therefore not be that much of a border on that land border and it could be dealt with in a electronic way.

The problem is that you have the Good Friday Agreement that almost 20 years ago was the settled will of the majority of people North and South in Ireland. A lot of that functionality was based on there not being anything different between the two parts. I mean we were both in the largest trading bloc in the world and surely we wouldn't be foolish enough to throw that into jeopardy for the uncertainly of negotiating with the rest of the world including the rest of the EU.

Now you are trying to make a frictionless border, but in the words used today the UK clearly wants to divert from the requirements of the customs union and single market as to apply this merely to NI would "undermine the UK common market and threaten the constitutional integrity of the UK".

But surely having devolved powers, which have also been recently promised to be increased post-Brexit, means there is already certain differences between the powers. Scotland has only recently used its tax varying power. The DUP are adamant that on certain areas Northern Ireland should be able to make their own decisions (if only someone was actually sitting in the Assembly able to do so). So how can something affecting one part of the UK therefore threaten the UK common market?

Maybe we have seen something about the post-Brexit situation. May's government wants to move away from the regulations that tie us into the customs union and single market. Some of those regulations are so that we produce compatible products that we can then sell to our largest and closest overseas (or in the case of Ireland down the road) markets. Can the plans really be that radical that it will undermine the UK market if NI remained.

Has the PM let the cat out of the bag. Will international business pick up on that. What about British business that exports a large proportion. This does not sound like a great economic promise to them of frictionless trade with the EU.

How is it going to be possible to meet all the objections that the PM has clearly outlined multiple times today? From what she has said today it seems impossible. The UK government clearly has no plan for how to deal with the Irish problem after 20 years of having an answer after centuries of not we look like we are being sacrificed once more.
Posted by Stephen Glenn at 16:35 No comments: 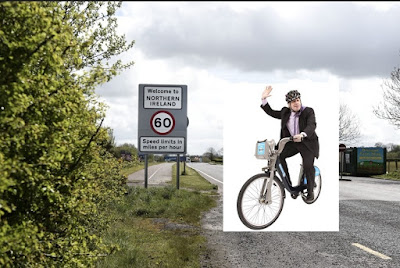 Listening to Boris this morning I have come up with a business plan that will work with the comparability of Brexit with the congestion charge. It my own solution to the obvious issues of the Irish problem afterwards.

I shall set up four Boris Bike Hire Shops. A pair in Newry and Dundalk with the other pair in Derry and Muff. This will allow people to get the train from Belfast either North or South and get off at the station hire a bike and cycle across the border to avoid the congestion charge.

This will be a highly profitable outcome post Brexit and I need to get negotiations the two Foreign Secretaries in the International Trade Ministers soon to get the franchise.
Posted by Stephen Glenn at 22:46 No comments:

Brexit is no Congestion Charge Boris

On the Today programme this morning Foreign Secretary Boris Johnson tried to compare being outside the EU with being part of different London Boroughs.

Firstly it was clear from his choice of boroughs Camden, Islington and Westminster that Boris has never lived south of the river and had to awkwardness of trying to get a black cab home. When drivers refuse to carry passengers "Sarf of the River". Although I did love the loophole I found of asking a driver to take me to Hampton Wick (North of the River) I could guarantee that the driver would come over Putney Bridge (to go south of the River) and head towards Kingston Bridge but I would ask to get out in Kingston near a taxi rank  to make it home.

Of course the connection Boris was making was about a frictionless congestion charge zone in a built up area to a border through often rural areas. Of course on that rural boundary it will not just be the vehicles crossing it that will need to be looked at but also what they are carrying. Boris after all is one of those advocating that when we leave the EU we also leave the customs union. So he is looking at a rural border where arms have been smuggled in the past as being controllable in the same way that London can read the number plates of every cars that has to go along a defined road in an urban environment.

Maybe Boris is looking at his other great enthusiasm the Olympics and will have a fleet of drones like at the PyeongChang opening ceremony patrolling the border to record every vehicle, person, cow and sheep that crosses the border between the roads.

Also while I joke about the Thames being a border in London in Belfast or Londonderry/Derry there are borders between communities. Belfast has its Peace Walls and the River Foyle is largely a divide with the West bank being predominantly Roman Catholic and nationalist and the East bank being largely Protestant and unionist. So Boris before you dare to compare London to the Irish situation look at a bit more history and present day rather just wiff waff on.

In conclusion to even attempt to compare the London Congestion Charge to Brexit is belittling the issues that the UK as a whole faces, but to seem to wipe out the Border issue in this way even more so. The fact that these comments came from the Foreign Secretary gives me no confidence that Britain's future post Brexit is in safe hands.
Posted by Stephen Glenn at 13:42 No comments:

Sammy it's not about scare stories but opportunities

I do love it when I get to school my one time Economics teacher Sammy Wilson especially when it is about economics. When I read that Sammy Wilson (my teacher for the final term of 1986-7) said Loyalists were applying for Irish passports due to Brexit scare stories I had to laugh.

Sammy should know all about cost benefit analysis especially when it comes to "opportunity cost". In economics this is the value of the next-highest-valued alternative use of that resource. In this case it the cost of time on travelling on holiday. Everyone born on the island of Ireland is entitled to apply for an Irish Passport and the Good Friday Agreement allows everyone in the Northern Ireland to identify as British, Irish or Both. So there is no need for loyalists to renounce their British citizenship to get and Irish Passport.

The other thing to look at then is what people in Northern Ireland use their passport for. As photographic ID to get on flights to the rest of the UK. The UK has promised that the UK/Ireland agreement on freedom of movement will not be changed post Brexit and neither have the Irish who also want a frictionless border.

Next there is holiday flights, most short haul locations that are popular would be in the EU so there is an potential opportunity benefit in being able to go through the EU passport holders queue rather than the non-EU queue. I once had to bring a group of largely non-EU residents into the country at Dover. I whizzed straight through but as the leader of the group hung around in case there was any issues with the members of the group, all but one of the other leaders also being non-EU. I was there long after the majority of EU passengers were safely on their way. Post Brexit going to Spain, Greece, Amsterdam of anywhere else will see more scrutiny of an UK passport or at least be in a queue with people who face more scrutiny no matter what the best outcome is.

Finally there is longer-haul flights and in recent times with the improved road to Dublin and the express bus from Belfast to Dublin Airport a lot more people in Northern Ireland will fly from Dublin to America that maybe catching a flight to London and transferring. So having an Irish passport at Dublin Airport would be a breeze.

Sammy Wilson, the DUP and their Conservative friends have yet to give firm answers as to what will happen post Brexit so many people are looking at it objectively. The costs of having an Irish passport instead of a British one are negligible in monetary terms, but the benefits in terms of time outweigh any additional cost. Therefore it is economically opportune to take up an Irish passport ahead of Brexit, if things aren't worse afterwards they can always get a British one when it is time to renew but that will be based on experience rather than promising utopia in all things post-Brexit. As no matter how much Sammy et al are in cloud cuckoo land about Brexit not everything will be as it is now.
Posted by Stephen Glenn at 10:08 1 comment: