We are back after a rest day. Probably needed as much by commentators and fans after stage 15 and the finish.

Matteo Rabotinni (FAR) had attacked on the big category 1 climb of the day some 93 km from the end, but there was a small group between him and the peleton, but this included Damiano Cunego (LAM) who had taken the virtual lead on the road. On the final descent he had crashed on a slippery turn but got back on his bike and carried on. The peleton were closing in on Cunego and soon had defended the maglia rosa.

Eventually they captured this groupetto and there was just Rabotinni The on the final climb the gaps came down and with about 2km to go the attacks started to come from the main group. First Roman Kruezinger (AST) then Michele Scarponi (LAM). Then a group of four broke clear in the chase Joaquin Rodriguez(KAT), Scarponi, Rigoberto Uran (SKY) and Ivan Basso (LIQ).

But when Rodriguez set off on a final burst he went alone. He caught Rabotinni with about 500m to go. But the Italian wasn't going to let the Spaniard have it all his own way. He dug in got the wheel and then coming into the last bend he retook the lead he had held for over 90km and crossed the line for a spectacular win.

Today's stage from Limone sul Garda to Falzes/Pflazen is a medium mountain stage but with no categorised climbs. 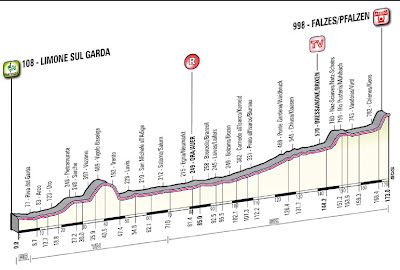 Mark Cavendish has been contesting sprints when there are points available so depending on the situation up the road he may well be going for whatever is left at Ora/Auer. There are a couple of steeper kicks towards the end of the stage. The last of which is in the last 5km. 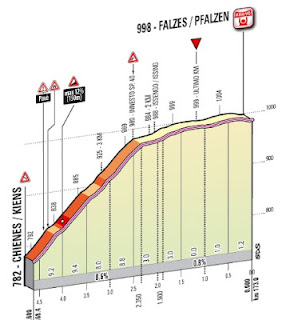 It is one of those days that there may well be a sprint finish and it will just depend what 'sprinters' are there. With more and more of them falling by the wayside including Matt Goss before the stage started on Saturday it is the sort of stage that if Cavendish in the maglia rossa (red jersey) can be with the head of the race at the top of the final kick he could stamp his authority on that competition with another strong performance.

I'm not saying that he will as that climb is steep in sections including a 12% gradient for a bit. But I do remember Cav shocking the field in the Tour de France with a sprint on after a climb to win one of his 20 stages so in the back of my mind there is an outside possibility of something like that today, as there is only one more flat stage, on Thursday, but three more high mountain stages he'll need to do something to keep the in form Joachim Rodriguez as bay in that contest.
Posted by Stephen Glenn at 13:07