It is our final day in Denmark but already this is a good Giro for team Sky. Geraint Thomas is still second in the overall classification thanks to his finish in the individual time trail around Herning.

Then yesterday the man who is second in the race helped the world champion to yet another win here in Denmark, the country where Cavendish won the rainbow strips.  The two of them were well up at the front, riding fifth and sixth wheels, ahead of a crash going into the finishing straight that caused a split in the peleton but because of the last km rule, no lose of time. Thomas himself wearing the red jersey for points leader finished 11th, before relinquishing his temporary custodianship of the points jersey to the man he hopes will still be wearing it in Milan.

Today we head to the east coast of the Danish mainland for a figure of eight circuit around the city of Horsens before three criterium loops around the city itself potentially setting up another sprint finish that Sky will want to consolidate they very good weekend in Denmark. 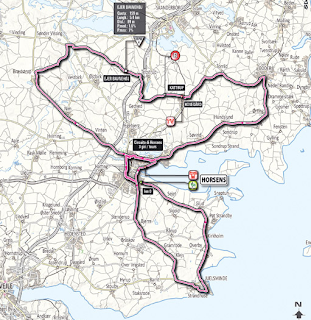 With the 20 second bonus for the stage win yesterday Cavendish is up to 12th in the overall classification only 18 seconds behind his team mate in 2nd place so another 20 second bonus today on the line would actually lift him up to 2nd overall, although of course with the mountains still to come Cavendish is only focussing on the red jersey for this tour.

Thomas because of his 2nd and 11th place finishes is actually second in the point classification at the moment.

The question already being asked by La Gazzetta dello Sport is can any other sprinter deny Cavendish.