Well we have had all the action over the last two days.

On stage 18 the last flat stage of the Giro no sooner had the Eurosport commentary team said that the four man breakaway were too far ahead for Mark Cavendish to even think of the intermediate sprint points that Sky went to the front and brought the gap down exceedingly fast to enable Mark to pick up the five points on the line for that contest. With 18 intermediate points he is second only to break away king Martijn Keizer VCD.

However on the line maybe Mark left it a bit too long to launch his attack as Andrea Guardini FAR launched his attack while Cav was still in the wheel of Geraint Thomas and finished just ahead of the Manx man. The loss of the three points for coming second on Thursday may proof costly to Mark Cavendish's defense of the Maglia Rossa today because of what happened yesterday in the penultimate mountain stage.

There was an attack up the road but that finally got hauled back on the last climb by Roman Kruezinger AST while behind him the main pack got reduced to just six of the GC contenders. Ivan Basso LIQ, Joachin Rodriguez KAT, Rigoberto Uran SKY, defending champion Michele Scarponi LAM, Domenico Pozzovivo COQ but the man those five all had to shake off was the best time trialist of the lot of them Ryder Hesjedal GAR.

Time and again they tried to go but the Canadian former mountain biker was always the first man unto the wheel. In the end he went off himself and only Scarponi could keep his wheel initially. Then there were two slightly behind Rodriguez and Basso, but Pozzovivo and Uran were tailed off as a third pair as all six appeared to be on their limit. But then Hesjedal puuled away from Scarponi and for a while it looked like he might catch Kruezinger up the road, but he just ran out of time to bring him back finishing 19 seconds after the Czech rider.

Down the hill Rodriguez was determined not to loss too much time or even worse his maglia rosa before they exited the mountains. He actually caught Scarponi on the line to take third place. For Cavendish fans it means that the Spaniad needs to be no better than 5th today and the jersey is almost certainly Cav's as neither man is liable to score points in the 30km time trial on Sunday. 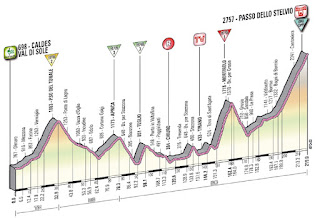 Today's stage is key for a number of classifications.

First there is the blue jersey (king of the mountains) this will be decided today. Matteo Rabottini FAR after his amazing breakaway on Sunday still holds the lead in this on 65 points, next man is Stafano Pirazzi on 44 who may have been hoping for better today with the big riders. There are five climbs a category 2, two category 3s, a category 1 and the final climb is a Cimi Coppi (outsdie classification) to the highest finish ever in the Giro at Passo Dello Stelvio. It is 22.4km of a climb to 2757m.

The intermediate sprint comes before the category 1 climb, so the way that Mark Cavendish and Sky have been riding this tour there is just the possibility that he may be able to take the 5 points there. If he does it would put him 18 points ahead of Joaquin Rodriguez would have to finish in the top 2 if he wants to win the maglia rossa, if the points aren't taken by Cav  anywhere in the top 4 would see that jersey pass to the Spaniard.

Finally there is the GC. Rodriguez leads by 17 seconds from Hesjedal, probably thankful there were no time bonuses yesterday.  Scarponi at 1'39" and Basso at 1'45" will have to get clear from Hesjedal in order to stand a chance of winning after tomorrow's time trial. Rigoberto Uran at 3'21" is the best young rider, his team mate Sergio Henao is 9th but second young rider on 5'47" so 2'26" down on that classificatoin a contest between the two Sky riders. So the white jersey should be Skys as Gianluca Brambilla is next a further 2'31" down.

Today is tough especially that last climb. We saw the leaders on the limit today and reaching for the barriers as soon as they crossed the line. Expect more of the same today as they leave everything on the road.
Posted by Stephen Glenn at 10:00