From Belshill to Belfast #GAWA

As regular readers will know I'm a big Livingston Football Club fan, indeed one of the things I find hard about being back here in Northern Ireland is not getting along to games and hearing the Drum Beat Mafia lift the Amber and Black army. Although even when I was supporting Livi at Almondvale I always smiled when I saw a St. Patrick's flag next to a player whether home or away in the match day programme Roar.

Of course the Green and White Army when they turn out for international duty at Windsor Park also have their drummers. There may even in the past have been a 4th Bangor Boys' Brigade drum performing that duty. So I was delighted today to hear that one time Livingston Captain James McPake has finally received a senior international call up, even more delighted when the Belshill born player would be turning out for the green and white army. 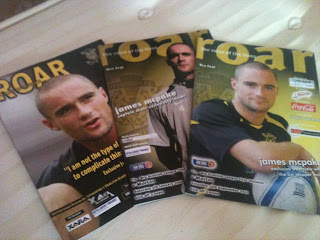 Now this does leave me with a slight dilemma as in the 5 seasons worth of match programmes next to his name during his 100 appearances in the SPL and 1st Division there is a Saltire. Do I get the tippex out and a red pen to replace it with St. Patrick's cross?

Now don't panic I'm not going to deface my collection, after all they are kept in files in clear pockets. Here are just three in which James featured on the cover. I'm looking forward to adding a Northern Ireland one with him on the cover to my collection of football programmes.

So I'm forward to cheering on James after all he has played for two of the clubs I could see the floodlights of from a house I've lived in (Coventry being the other).

So on behalf of the Green and White Army welcome to the squad James. Scotland haven't used him in senior internationals so their loss has been Northern Ireland's gain, I'm looking forward to seeing him in the 'right' green shirt.

Update was doing a little bit of digging about the three young players from 2004-2008 Livingston teams. Like James McPake, Graham Dorrans made his debut at senior level for Scotland against the Netherlands on 7 September 2009. The other full international from that youth team Robert Snodgrass was due to appear the following month against Japan but injury made him have to withdraw from the squad. So he ended up making his full international debut on 9 February 2011 against....