As I said yesterday the Giro would not be won on the climb to Rocca de Cambio yesterday but some of the contenders did stretch their legs.

Defending champion Michele Scarponi (LAM) was one of the two who pulled away from the small remaining field on the last climb, however Paolo Tiralongo (AST) took the honours on the line.  However, the strongest ro react was Frank Schleck (RNT) was was only three seconds back for the final time bonus spot just ahead of Joaquin Rodriguez (KAT). Ryder Hesjedal (GRM) was a further 2 seconds down, Ivan Basso (LIQ) in a group of 3 4 seconds down with Christian Vandevelde (GRM) in the bigger group of 18 who were 11 seconds behind the leader.

The day's wearer of the Maglia Rosa (pink jersey) Adriano Malori (LAM) finished 11.28 down which means that Hesjedal takes the jersey and lead unto today's stage ahead of yesterday's stage winner Tiralongo at 15", Ridriguez at 17" and Vandevelde at 21". 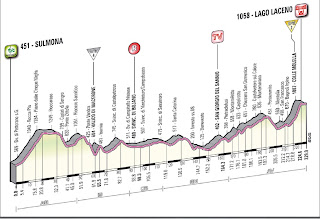 Today we continue down the spine of Italy from Sulmona to Lago Laceno just to the east of Naples.

Similar to yesterday while it bumpy there are only two categorised climbs a cat 4 early on at Valico di Macerome before a category 2 climb of Colle Molella to 4km from the finish. So unlike yesterday which finished on the climb there could be 4km run in off that final Colle, there isn't a great deal of a descent it is mainly flatish from there to the line. If yesterday's cat 2 only led to an handful of seconds I don't foresee any opening of the gaps between the big guys unless they gain bonuses at the line. They will lie in waiting just watching each other waiting for the first high mountains next weekend.

The first Maglia Rosa of this Giro Taylor Phinney (GRM) finished again in the last group but with Dennis van Winden (RAB) but behind  the last man in GC Theo Bos (RAB). He is still almost 10 minutes ahead of Bos but currently is 189th out of 193 riders still riding.