The candidates for the 1970 69th IOC congress in Amsterdam hold the unique distinction of being the host Cities for the next series of Games without any new candidates coming forward to try their hand. Montreal, Canada who had lost out on the previous Games only came second in the first round with 25 votes behind the 28 gained by Moscow, Los Angeles the only previous host in the mix came third with 17.

When the Californian city was eliminated all but one if its votes went to Montreal giving them 41, the other didn't transfer and Moscow remained on 28.

This wasn't the first time that Montreal had bid for the Games and indeed  they were the first host city to have bid for both the summer and winter Games in the past to host a Games. As well as bidding for the previous 1972 Summer Games Montreal had been a candidate city for the 1944 Summer as well as 1932, 36 and 44 Winter Games.

Speaking of Winter Games the 1976 Olympic year also saw the first Winter Paralympics which had been held in Örnsköldsvik, Sweden earlier in the year.


Montreal in Canada may have beaten the Moscow in the Soviet Union and Los Angeles in USA as being the non-superpower option at a time fearing a political backlash. The next two games of course were hosted by those countries as tensions did run high.

However, relatively neutral Canada was not totally immune. Twenty Eight African countries were outraged that the IOC had not banned New Zealand who had taken part in a Rugby Union tour of South Africa earlier in the year and refused to take part. Although as this protest only happened after the first day of competition Morrocco, Cameroon and Egypt had already taken part. The African Nations were joined in the protest by Iraq and Guyana, but Senegal and Ivory Coast were alone of the southern and central African nations not to take part in the Boycott.

Despite the boycott there were also new members of the Olympic family. Andorra having debuted at the Winter Games in Innsbruck earlier in the year made their Summer debut, along with Antigua and Barbuda, Cayman Islands and Papua New Guinea. None of these new nations in 1976 have yet managed Olympic success of any colour. Although two Olympians of note for these nations are Papua New Guinea's Dika Toua who in 2000 became the first women to lift a weight in Olympic competition in the 48kg category. She is also her nations most successful Olympian to date coming 6th in the 53kg class in 2004 and 8th in 2008. The other is the Cayman Islands Cydonie Mothersille who in her fourth Games in 2008 gave her nations best performance when she made the final of the women's 200m on the track. She came in 8th in that final but had won bronze in the 2001 world championships at the same distance.

In the Paralympics the new nations were  Burma, Colombia, Ecuador, Guatemala, Indonesia, Luxembourg and Mexico. 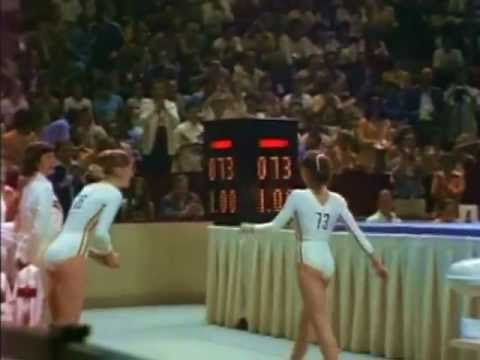 The limits of technology not human achievement were the story in Montreal Forum on 18 July in the women's gymnastics.

One of the favourites for all around success Nadia Comăneci came off the uneven bars in what looked like a very good performance. However, once the judges scores were in the scoreboards around the forum flashed up her competition number 073 and a score of 1.00. The crowd were initially stunned before they realised what the issue was. The maximum score that the boards were designed for was 9.95 having only three digits in the display. They had  just witnessed the first perfect 10 in Olympic competition. They weren't going to have to wait long to witness more.

The 14-year old Romanian would received 6 more perfect scores throughout the competition. Indeed on the uneven bars she was nothing but perfection. She missed out only on a medal in the vault and then missing bronze by only 0.025 marks in taking the individual all-around gold, as well as the apparatus golds for uneven bars and beam, bronze in the floor and helping Romania to silver behind the USSR in the team event. Nellie Kim (USSR) who was second in the overall almost managed a 10 in the vault for the all-around. 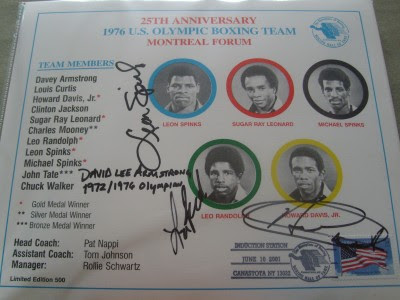 The 1976 USA boxing team came away with five gold medals. However, when you hear the names of the men who won you will understand that this was one of the greatest contingent of boxers assembled under one flag at one Olympiad in history.

Bizarrely the USA's bronze medalist in the heavyweight class John Tate was a third of that Olympic team that had been lined up to challenge Holmes for his world title. He had previously captured the vacant WBA title after Ali's 1979 retirement, although he lost it on his first defence. Therefore the class of 1976 was the only team of boxers to have three medalists who went on to become World Heavyweight champions.

The women's athletics was dominated from behind the iron curtain. Only Annegret Richter of West Germany being the only women to take gold from outside that block in the 100m. Even that was a shock as she wasn't even the fastest women's sprinter from Dortmond, that was the eventual bronze medalist Inge Helden who had run 11.04 secs in the lead up to the Games.

In the end it had been a German 1,2,3 though West, East, West with Renate Stecher taking silver.

Of the 13 other medals in women's athletics East Germany won 9, USSR 2, Bulgaria and Poland one each. Those other golden girls:
Don't shoot I'll soon be Prime Minister

People in the UK know that the 1976 Games saw the appearance of Princess Anne in the three day event. She of course will never lead her country, meanwhile over on the shooting was a man who one day would.

Taking part in the clay pigeon shooting was a man who three years later would be elected to Japanese House of Representatives. He may have ended up tied for 41st position but 32 years later in 2008 Tarō Asō would serve almost a year as his country's Prime Minister like his maternal grandfather before him.

In the women's basketball there were high hopes for the USA women's team to start to dominate the tournament as their men had done until their final in Munich four years earlier. However, in the round robin tournament there was a shock when in their first game against Japan they were beaten 81-74. Their penultimate game was against the USSR who had already beaten Canada 115-51, Czechoslovakia 88-75 and Bulgaria 91-65. Unlike Munich 4 years earlier the battle of the cold war nations was never close with the USSR ending up winning 112-77. The Soviets went on to take gold with a final victory against Japan 98-75. At the next Games of course the USA didn't take part, but since 1984 they have only failed to return with gold one other time in 1992.

In Handball the USSR women again in a six team round robin went through their matches unbeaten. Their two closest games were against Hungary which was 5-5 at half time before the Soviet team ran out 12-9 winners. The Hungarians ended up in bronze medal position. The silver medalists were the only team to score double figures against the USSR being on the wrong end of a 14-11 scoreline.

Rowing also for the first time had women's events. But like so much else in 1976 this was dominated by Eastern Europeans. East Germany took gold in the single and quadruple sculls, coxed fours and eight. They only missed out in the double sculls and coxless pairs in both events to Bulgaria and in both securing the silver medal

Expansion of the Paralympics 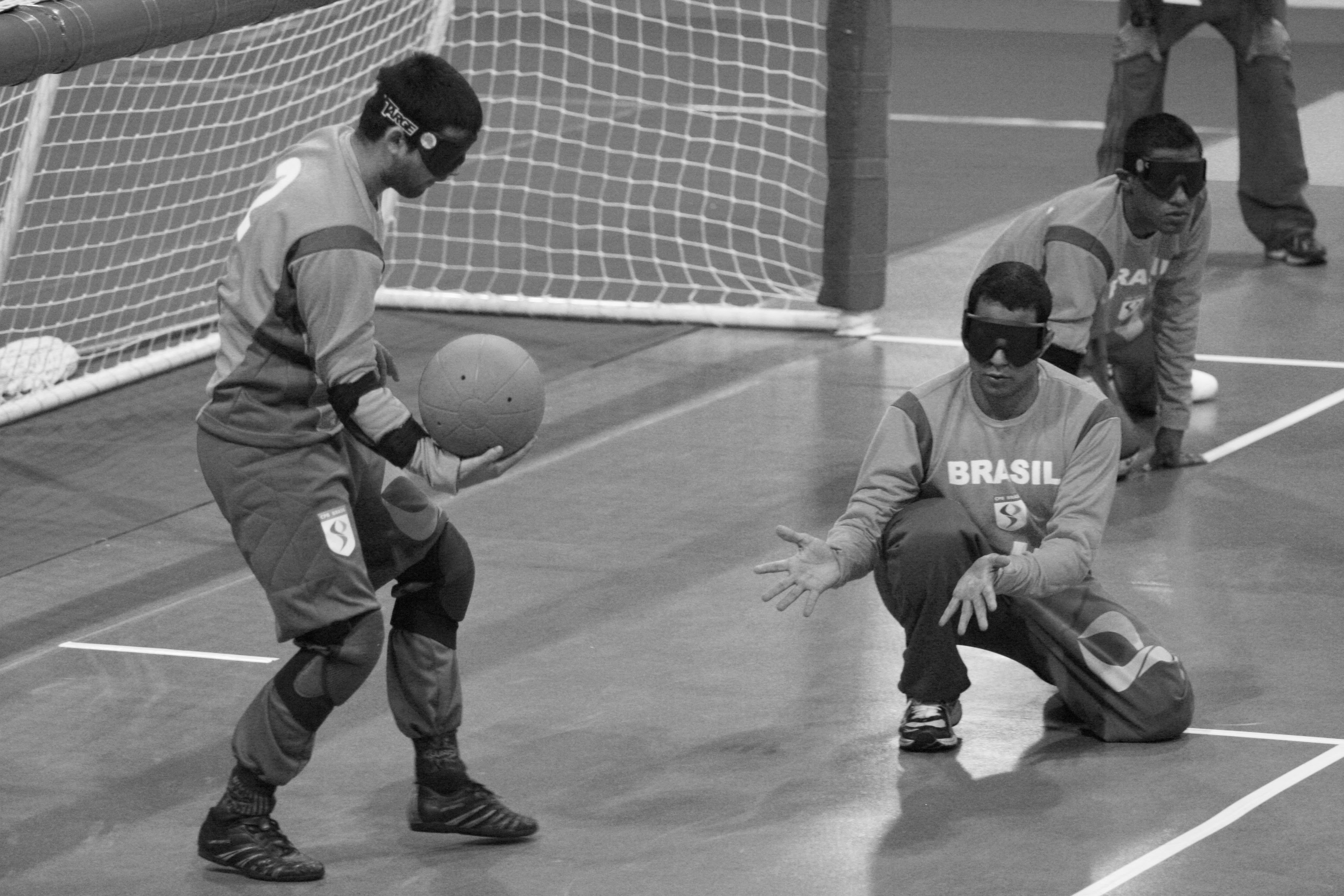 Up until now the Paralympics had been limited to spinal injuries but in 1976 sports for the visually impaired and amputees appeared for the first time as part of the official programme.

One of these events was goalball played with a ball with bells in and tactile lines for the court so that the players can navigate around it. The first champions were Austria.

Shooting was also added to the Paralympic calendar J. Byrns of Canada winning the amputee mixed rifle gold as part not only of the expansion of sports but diversity of Paralympians.

Thank you for having us...but don't have any Gold


1976 was the first time that a host nation didn't win any gold medals at a Summer Olympic Games. Canada only won five gold and six silver medals. 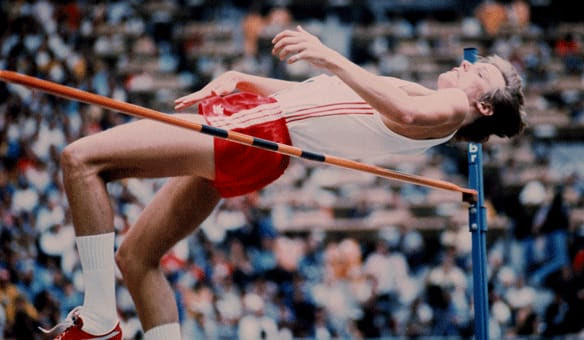 Greg Joy in the High Jump may have been the closest to winning that illusive gold. At the height of 2.23m there were still four athletes in it. The USSR's Sergey Budalov failed his first attempt and passed on his other attempts at this height. The USA's world record holder jumper Dwight Stones had been clear until then but failed on all three attempts. Joy cleared the bar on his third and final attempt while Poland's Jacek Wszola added to his first attempt clearances with another one. At the next height 2.25m Wszola had his first failure, but Budalov had two more and was out meaning that Joy had the silver. His passed on his second attempt and the bar was raised to 2.27m just 4cm shy of Stones's World Record. Both men failed twice putting Joy out of the contest. Budalov was to have one final attempt at 2.29m but failed that too.

John Wood in his third Olympics picked up his only Olympic medal in the one man Canadian 500m. Coming in second (nearest to camera) he was 0.25 seconds behind the winner Aleksandr Rogov URS but was only 0.02 seconds ahead of Yugoslavia's Matija Ljubek. He had to paddle in the repechage after the heats after just failing to make the top three qualifying spots. Ironically he was ahead of Rogov in that heat when both were obviously saving energy.

In the show jumping Alwin Schockemöhle FRG had gone clear in both the competition rounds. So Michel Vaillincourt on Branch County found himself in a three way jump off for the medals with Debbie Johnsey GBR and François Mathy BEL to decide the minor medals.

He took out the first jump of the jump off, but remained clear for the rest of the round. He'd also completed in the quickest time of the three. With just the one fence down the Canadian took silver over the Belgian with 2 and the Brit with three down a refusal and time penalties missed out on a medal.


In the swimming pool Cheryl Gibson was facing an even greater near total dominance of the East German women swimmers in the pool than they had on the athletics track. The East German's won 11 of the 13 women's events, seven of them in World Record times and that included the 400m individual medley having missed out as third Candian in 5th in the 100 backstroke final. In the IM she was almost 5.5 seconds behind Ulrike Tauber.

Elsewhere in the pool it was the men's 4x100m medley relay team that failed to get within three and half seconds of the USA swimming a world record to take the final silver for the home nation. Only Graham Smith 4th in the 100m breaststroke and Clay Evans 6th in the 100m butterfly had made the individual 100m finals. Meaning that Stephen Pickell and Gary McDonald had not made an individual final so that makes the achievement all the more spectacular.

See also...my full list of posts about past Olympics