Sorry I've missed by previews of the last few stages, I've been a little bit busy in real live.

But on Friday on Stage 13 we actually had a broad straight finish for a flat stage. Matt Goss was getting the lead out towards the end and had the jump on Mark Cavendish. But when the sprint came to the left of the road Cav was boxed in, freewheeled for a couple of beats before the gap opened for him again as Matt Goss returned to the centre. He took the opportunity kicked again for the line and in the end won by a bike length. With only one flat stage remaining he leads the points competition by 31 points. Providing he can get over the Alps over the next few days he may well be adding the Maglia Rossa to the Maillot Verte and the rainbow world champs jersey inside 12 months.

Yessterday in the first of the mountain stages from Cherasco to Cervinia in the wet there was action on the climb up to Cervinia, there was a group of three up the road but then Ryder Hesjedal broke out of the group containing the contenders including Scarponi the defending champion and Rodriguez who was in the Maglia Rosa. Scarponi did try and get across but was pegged back by the rest, then Rodriguez also tried but he too fell short. At the line Hesjedal may have been 20 seconds behind Andrey Amador Bikkazakova who won the stage, but most importantly the Garmin rider was 26 sec ahead of the main group. It was enough to lift him back into pink. 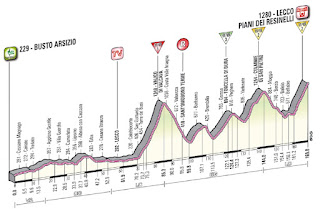 Today's stage from Busto Arsizio to Lecco Piani dei Resinelli starts out fairly innocuously but then with 100km it becomes either uphill, or down. The first of these is the category 1 Valico di Valcava the only cat 1 on today's stage. But 14km of descent there is a bump that is uncategorised, before a category 3 then two category 2s including the final ascent to the finish.

With tomorrow being a rest day some of the GC contenders might be waiting to make an attack on the final 8km climb. Or someone might try their luck on the previous one which is 9km long. Somebody may well aim to leave everything out on the road today knowing that there is a day's rest tomorrow and a medium mountain day on Tuesday before the return to the high mountains on Wednesday.
Posted by Stephen Glenn at 14:43