With Joaquin Rodriguez winning the stage into Cortina d'Ampezzo yesterday Mark Cavendish is still in the maglia rossa (red jersey), just by one slim point over the wearer of the maglia rosa (pink jersey) there is one flat stage left and two on the mountains. So that crash caused by Ferrari may well prove vital in deciding where this jersey goes. 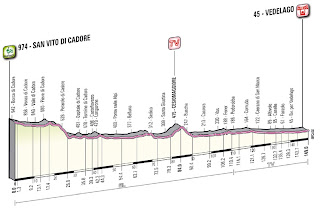 Today is the last flat stage before the final Time Trail into Milan on Sunday, indeed if anything it is downhill most of the way as we finish 900m further down than we start. There is just one thing that Mark has to do today to keep hold of that jersey at least for one more day, stay upright and win points. There is just 149 km of racing today from San Vito di Cadore to Vedelago. The last 5 km of straight and flat with no major bends on the run in. Sky will have to deliver Cavendish to the front at the right time, there are less printers around now, but they will need to keep him save from the number of have-a-go wannabes, who may not be used to going wheel to wheel in such a finish.

The one thing in Marks favour is that there are 29 points for the line in a flat stage opposed to 25 on a mountain. A win today would extend the lead to 30 points. It would mean that Rodriguez point opportunities are down to 25, 20, 16, 14, 12, 10 etc for the last two days in the mountains when others will want and have to take it out of him. Whether he marks his rivals or goes off after minor riders who can climb will determine the points competition.

But first Mark Cavendish has to win to make it exciting.
Posted by Stephen Glenn at 13:59