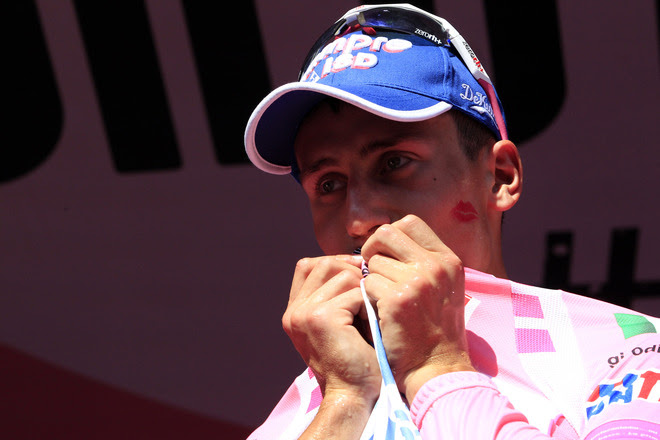 Well yesterday certainly saw something rather unusual happen. The Maglia Roas (pink jersey) changed hands, that wasn't what was exceptional, but it is when you learn who it went to.

There was a break away over the undulations yesterday in the end five of that breakaway stayed clear. One Miguel Rubiano (AND) went solo on the last categorised climb and stayed away. But it was the group of four that pursued him where the interest lay. The best placed men in that group were Adriano Malori (LAM) and nine seconds behind him Michal Golas (OPQ) with time bonuses available for the first three any of the three could take the Maglia Rosa depending on the gaps and what time adjustments if any they picked up. In the end all three did pick up a time bonus. Rubiano needed either another 31 seconds of for the other two Alesandr Dyanchenko (AST) or Cesare Beneditti (APP) to take the bonues and 17 seconds more. So as it was the strange thing is the Adriano Malori ended up in pink for today's stage. Strange because in last years Tour de France in the ride into Paris he was the laterne rouge (last rider) in the race. Of course he'd already made amends for that in the Tour being the most compative rider on stage 6 last year, but now he is leading another of the grand tours. 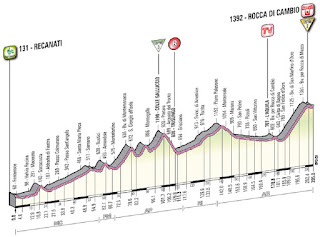 Today's stage is another one where the sprinters will finish in a groupetto at the end of the race. Yesterday the last group 33mins 12 secs back contained world champion Mark Cavendish and the former Maglia Rosa Taylor Phinney.

There may only be two categorised climbs in the stage the first a category three and the second a category 2 but the second major climb leads the last 16 km to the finish at Rocca di Cambio. There is a possibility that this afternoon the GC contenders might stretch they legs to see what the others are like on that final climb. It is major being only a cat 2. But it may be a time to try to shake up the pack a little seeing as there are still 76 riders within 2 minutes of the lead. A little test of the legs of the peleton on that climb will probably show us who the contenders are and may show us who hasn't got the form.

Yesterday we lost Thor Hushovd, Tyler Farrar and Roman Feillu when the three of them climbed off their bikes and Pablo Lastras Garcia when he fell off his. Meanwhile Taylor Phinney in finishing with Cavendish has dropped from first in the race to 188th of the 194 still riding.
Posted by Stephen Glenn at 11:00