The two runner up cities to host the 1976 Olympics were the only two candidate cities that made presentations to the 75th IOC session in Vienna, Austria on 23 October 1973. In what was was the Cold War putting up Moscow the Soviet capital against Los Angeles the home of Hollywood.

On 24th December 1979 USSR troops started to arrive in Afghanistan. They had seized military command of Kabul the capital by 28 December. But there was international outrage at this action, and the Games were less than 8 months away. The IOC decided to go ahead with Moscow hosting these Games a change of reaction to Tokyo being denied the 1940 Games before World War II broke out because of the Second Sino-Japanese War starting in 1938.

This resulted in a bigger protest than the 24 countries who boycotted Montreal in 1976 because of the New Zealand Rugby Team's tour of South Africa. Indeed the 80 nations was the smallest participation since the 1956 Games and those 65 nations that boycotted took 71% of the medals 4 years previously, the largest of these being USA, West Germany and Japan.

There were a further 15 nations who took part in the parade in the Opening Ceremony under the Olympic Flag or their Olympic Association Flag rather than their nations flag in recognition of the Olympic Truce but as an act of protest as the USSR's occupation of Afghanistan. Some of these nations had depleted numbers as some athletes refused to take part in the opening ceremony or some sports governing bodies had not sent teams as part of their national contingent. These nations were Andorra, Australia, Belgium, Denmark, France, Great Britain, Ireland, Italy, Luxembourg, Netherlands, New Zealand, Portugal, Puerto Rico, Spain and Switzerland. The Olympic Hymn was also to be used for the 27 occasions that these nations won gold, and the Olympic flag raised for their 76 medal performers.

Despite more nations staying away that any previous games the magnetism of the Olympic family still managed to attract new nations to the Olympiad. This time Angola, Botswana, Laos, Nicaragua, Seychelles, Mozambique and Cyprus joined. There was also the renaming of now independent Rhodesia to Zimbabwe.

The Angolan men's medley relay team in the pool were the best placed of the competitors from the new nations. they finished 11th including the man who set the national breaststroke 100m record in the individual competition, he was known as Francisco Lopes Santos. If there were a contest for more diverse art Olympian Santos would probably pick it up.

He is known in the visual art world as Xesko for his paintings inspired by Dali (see left). To poetry lovers his is known as Elias Karipande and to fantasy and sci-fi lovers as the author Alan J. Banta.

Joining the Paralympics were two nations  Iceland and Kuwait, while South Africa were facing the first Games they were banned from because of Apartheid.

The Games of four nations

Although all the events were staged in the USSR of course that was a nation that ceased to exist within 12 years. Therefore locations were events were held during these games are now part of four separate national Olympic Committees.

With Moscow being landlocked the sailing of course had to head to the coast. In this occasion it headed to the Baltic Sea the third time that sea had hosted Olympic regattas after Stockholm and Helsinki. It was held in Tallinn now in the restored Estonia.

The football of course went to some of the great cities of USSR football including the stadium of Dynamo Kiev in what is now Ukraine and Dynama Minsk in Belarus.

Finland's Tomi Poikolainen had sat no higher than 4th on any of the first two days of shooting in the men's archery competition.

Top on day 3 was Dennis Savory of GB on 630 but he was already well down the scores the contenders were
It was all down to the final day and the closest range 30m targets.

He was never to repeat his golden moment coming 5th in 1984, but in Barcelona he helped Finland secure the team silver medal.

The Paralympics in 1980 now devided competitors into one of four categories amputees, visually impaired, cerebral palsy and wheelchairs. There was aslo an addition of volleyball as both a sitting and standing event. Netherland's won the men's sitting and Israel the standing.

At the request of the Netherlands as host South Africa were not issued an invitation to take part in the 1980 Paralympics because of their apartheid stance. This brought the Paralympics in line with the Olympic movement who had operated such a ban since 1960.

László Papp Hun from 1948 to 56 had won golds at middleweight and then light middleweight. But in the ring at Moscow Cuban pugilist Teófilo Stevenson was bidding for his own piece of then unique Olympic history. He was going for a third consecutive gold in the same weight division, and it was heavyweight as well.

To have got that far he had already in 1972 beaten fancied USA boxed Duana Bobick who was a world title contender until he lost a fight to Ken Norton. In 1976 he also had beaten John Tate in a 1st Round KO, Tate had taken over former Olympic Champion Mohammed Ali's vacant WBA world heavyweight title at the end of 1979.

1980 as a result of the US led boycott was possibly his easiest gold medal in this weight division. But he was determined to fight on to the 1984 Games to prove he still has the best. In February 1984 he beat Tyrell Biggs who went on to become the Olympic Super Heavyweight champion in Los Angeles months later. Of course the Soviet Union led boycott of 1984 which Cuba followed denied him the chance of that fourth gold.

Jamaica don't run away with this medal

We all know that Jamaica are exceptional in athletics, but did you know that they have only ever won one Olympic medal outside the confines of the athletics stadium?

In 1980 they managed to show speed in something else.

At the velodrome in the men's 1000m individual time trial the 16 year old world record was smashed by gold medalist Lothar Thoms of East Germany. But all of the top six cyclists managed to break the mark as well. The surprise in third spot was David Weller of Jamaica.

Sub 15 minutes in the pool

The cheers in the Olympic pool were deafening during the 1500m men's freestyle. So much so that in the diving competition for springboard Aleksandr Portnov had a poor swim which under a protest about the noise he was allowed to retake.

The man the cheers were for was a Leningrad son of a sea captain Vladimir Salnikov. He had already become the first man to swim 800m in less than 8 minutes two years earlier. This was his second Olympics having come 5th in the 1500m freesytle in Montreal. Without USA or West German competition her would have to do something special to prove that he was the king of long distance freestyle. On 22 July he did just that.

The 15 minute mark for 1500m freestyle was equivalent to the 4 minute mile on the track, believed to be that milestone that just maybe could not be broken. Brian Goodall of the USA had been closest to it in the Montreal Olympics with 15:02.40.  However, with the home crowd cheering on as each 100m was close to or under a minute in duration the Soviet swimmer finally touched out on his 29th wall in 14:58.27, winning by more than 16 seconds in an all Soviet podium. It was a record he would lower twice more over the next 3 years but it was the record he would hold for the next eleven.

In Moscow he also won the men's 400m freestyle as well as being part of the 4x200m freestyle relay gold medal USSR team. In 1984 he could not defend his title due to the boycott. But in 1988 aged 28 he turned up in Seoul, many thought he was past it, it was two years since he had bettered his 800m world record and he was considered in decline. However, on the 25 September 1988 he almost became only the second man to swim under 15 minutes in an Olympic final when he touch out in 15:00.40. When he returned to the village that night he was greeted my a standing ovation from the other athletes.

In this the year of the London Olympics it is impossible to mention the competition in the middle distance races. A competition between two men from the same nation one of whom is now in charge of the Games 32 years later.

Sebastian Coe was the fastest man over two laps of the track at 800m. He has set the world record of 1:42.33 the year before the Games in Oslo, only he would be able to beat that to 1:41:73 until 1997. He had also been the fastest man over 1500m until in the run up to the Games Steve Ovett took that off him at the same Oslo track, he had also been unbeaten over 1500m or the mile, including in heats, for 3 years. 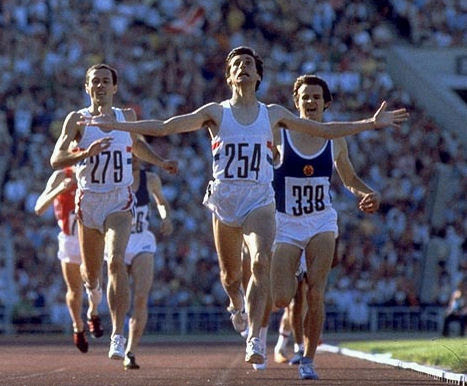 The stage was set, Coe's favourite event was up first with the final of the 800m on Saturday 26 July. Coming off the last bend Ovett was on the shoulder of the Soviet athlete Nikolay Kirov and ready to strike but Coe had got boxed in down the back straight and had to slow down to get himself out of difficulty as was metres behind. When Ovett launched his kick Coe was still straining to make up ground, he made it past Kirov just before the line but his fellow Englishman was still a couple of metres ahead.

A couple of days later both men regrouped for the heats and Semis of the 1500m. Both men made the final on the Friday with ease along with a young 19-year-old from Wearside called Steve Cram. With about 2 laps to go the East German Jürgen Straub decided that the only way he would stand a chance was to up the pace. Coe followed him and Ovett kept his rival firmly in his sights. This time off the last bend it was Coe who would open up the sprint for the line, but the spirited East German wasn't going to give up so easily. What was surprising was that Ovett seemed to lack his normal finishing speed and in the end was unable to get ahead of Straub and had to settle for bronze.

In 2014 Russia will become the sixth nation to have hosted both the Summer and Winter Olympics when the games head to Sochi on the Black Sea Coast, following on from France, USA, Italy Japan and Canada.

Of course when Moscow held the Games in 1980 they were in the Russian Soviet Federalist Socialist Republic merely one part of the USSR. The next Games will come to Russia who were first in the Games in 1900.

See also my full list of posts about previous Olympics
Posted by Stephen Glenn at 17:00