Yesterday Mark Cavendish resumed his place on the podium as he won the sprint against Matt Goss. He took his place there for the first time in his 80 professional wins with his daughter one-month old Delilah in his arms. But I don't expect to see Mark up there as stage winner today. 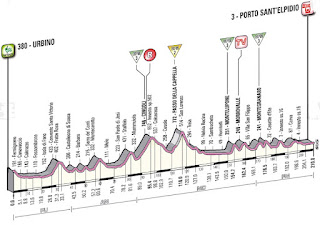 The reason quite simply is that the tour goes uphill. Not massively so, but enough that expect to see all the sprinters in a Gruppeto at the back of the field.

There are three category three climbs and one category two, plus a lot of uncategorised lumps in the road all along its course. This is not sprinters' territory but also it shouldn't really lose any of the GC contenders the race unless they really are not on form.

The start at Urbino is inland from the finish yesterday at Fano where Sky led out Mark Cavendish so perfectly that when Goss tried to accelerate to get around and beat him the Manx Rocket just had to put his own foot down and race for the line. But unlike yesterday's largely straight and for the start level route, today the race will climb a total of 13 times. The hardest of these is the 8km climb up the Passo Della Cappella.

There does follow 46 km of downhill or flat valley roads before the second of the category three climbs so there is an outside chance that some of the sprinters may get back on, but with six more lumps in the road two of them category three it would depend how much was taken out of the legs to get back, I suspect that there will be no way that the sprinters will be in a fit state once they reach the top of the last bump 12 km from the finish to be thinking of contesting a sprint finish. Although maybe some of them will surprise us.
Posted by Stephen Glenn at 12:24