Yesterday's stage did turn into a sprinters stage but with that corner just before the finish causing problems.

Read into it what you will but the sprinters did seem to take two different approaches to the corner. Matt Goss appeared to slow and wanted to take a wider entrance into the corner while others were going in hot braking later in time to turn at the far crash barrier before reapplying the full pressure for the straight.

Whatever you views and I know I exchanged some via twitter with the Red Jersey wearer himself and a number of sports fans who unlike me hadn't tweeted live before the race was finished. 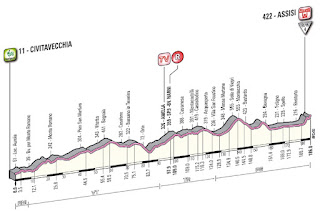 Today's stage is deemed to be a medium mountain stage. It is certainly lumpy on the way from Civitavecchia to Assisi today but the kick up the end is the only categorised climb. It may only be a cat 4 but it does go up very steeply all of a sudden in the final 4 km.

There is actually a double climb into Assisi although the first one does have slopes of a maximum 15% gradient leading up to 2.4km from the finish. The average gradient from 4km to there is 9.2%. This is where the field will really splinter. Unlike yesterday it will not be approaching that slope at sprinters pace because the sprinters will not be keeping up with events at the front.

There is then just over a km of descent before hitting a traffic island before the final climb at 1.2km, which goes through the city gate and a narrowing of the road and over cobbles. This may at 8.5% average gradient not be as bad as the first part of the ascent, but there has been littler recovery time between the two and so the leader to the line will have made whatever move happens on that first kick to be in a position to go for the line. 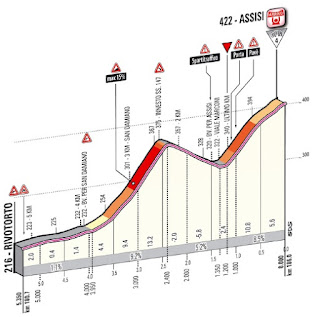 On Eurosport yesterday they were joking that a Francis or Frank or Francisco would have to be the winner in Assisi. In that case Frank Schleck (RNT) is the best placed of any of them in 9th. Francis de Greef (LTB) is more of a time trial specialist in 40th. Francis Mourey (FDJ) coming from a cyclo-cross background might fancy his chances lying in 62nd. Yesterday's winner Francisco Ventoso Alberdi (MOV) is more a sprinter. The others are Francesco Failli (FAR) and Francesco Chelli (OPQ).

Don't see a great deal of potential in fulfilling that prophecy from the Eurosport guys today, but you never know. There may be some divine inspiration from St. Francis of the ilk of the finish.
Posted by Stephen Glenn at 10:36