Today's stage should end up a sprinters stage.

Today's stage should end up a late breakaway win. 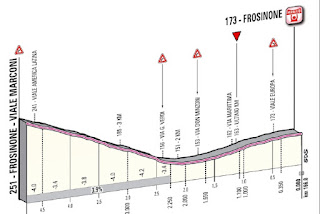 There are two option as to how today finishes. First there is a kick up from just before 5 km to go. So someone who can open a big lead at that point could get away and negotiate the descent then the twist and turns into the finish.

The sprinters teams however, will be trying to maintain control of those breakaways from that final small kick up. But then there is the matter of getting their man to the front. This could be important as there is a sharp 90 degree left hand turn only 350 metres from the end. Just the spot where the sprinters are normally waiting to be released behind their final lead out. If someone goes in too fast at that point anyone could be affected by that and I could even end up like a Foinavon moment if someone near the front brings down the rest of the leaders.

Either was this stage will be worth watching for the finish.
Posted by Stephen Glenn at 11:00