The Flame is lit and on its way #London2012 #Olympics 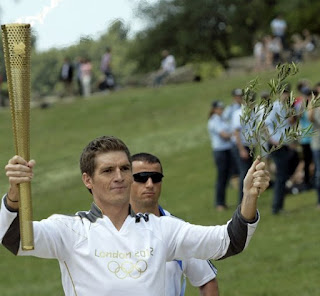 Earlier today at Olympia the sun was used as is traditional to create a flame. That flame was then trasferred by a torch to a pot to be taken to the location of the original Olympics for blessing.

The relay of the flame has begun and the next person in the relay was one of the children who was present in Singapore in 2005 when the Games were awarded to London, now a keen boxer in East London. But like Gianniatis has both Greek and UK roots.

In the case of Alex Lukos his family came from Greece to London much as the flame will be doing over the next few weeks.