Today is the final stage of the 2012 Giro d'Italia. It will feature an individual time trial over 30km of Milan's roads. 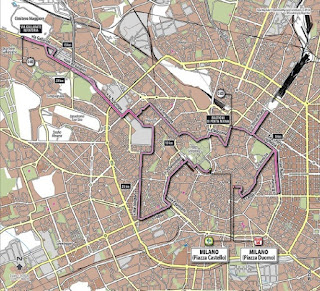 Yesterday Joachin Rodriguez managed to take that all important 4th slot which put him 1 point ahead of Mark Cavendish in the points classification and more or less ensures that he wins the maglia rossa (red jersey). As at 30km the time trial is too long for Cav who has been known to surprise in shorter ones. The only thing that might work in the Manx mans favours is a drastic deterioration in the weather after he completes his circuit that affects all the top riders. With three 180 degree turns a slippery road might just be what is needed. Sadly the weather forecast isn't predicting anything other than sunshine. Ironically because Rodriguez is still in the magllia rosa (pink jersey) as race leader Cav will be wearing the maglia rossa into Milan.

So with Matteo Rabottini FAR in the blue jersey as king of the mountains, Rigoberto Uran SKY almost certain with a 2'28" lead over team mate Sergio Henao going to take the white jersey for best young rider, having been out in front of the race for 683km Olivier Kaisen LTB is the king of the breakaway it is down to the battle in the GC.

Rodriguez  leads Ryder Hesjedal GRM by 31 seconds with the defending champion Michele Scarponi next but at 1'51" surely with too much to make up. Hesjedal is the better time triallist of the two leaders, but as we often see when the race win is at stake a man known mainly as a climber will do whatever it takes to hang on and go beyond many people's expectation. It comes down to just over 1 second per kilometre. So if the gap in seconds at the two time checks equates to the distance traveled then this is going down to the wire. If Rodriguez keeps it well below it then he is fighting hard to take home two jerseys, but if Hesjedal is well over it then he has done enough in the mountains to secure his win.
Posted by Stephen Glenn at 10:39