We need sexual orientation strategy because of bigots like Allister

This was asked in the Northern Irish Assembly on Monday:

"As there is already a plethora of statutory protections for the so-called gay community and generous financial provision from the junior Minister’s Department for various organisations therein, why do the junior Minister and the First Minister, who once campaigned to save Ulster from sodomy, now want to introduce a sexual orientation strategy? Why do they now think it necessary?" 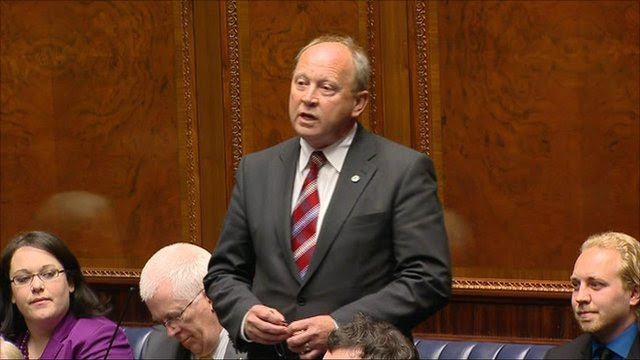 The person asking the question was Jim James* Allister MLA for Northern Antrim. Now to be fair the when in points of order he did ask:

"If a Member asks a supplementary question that is patently not answered, as with the question that I asked Mr Bell, is that question also answered in writing subsequently?"

He was right the answer didn't cover any of his points.

For a start there is hardly a plethora of statutory protections, the OFMdFM website does list what has been brought forward and what is still to come. The point of a strategy is to protect the "sexual orientation sector" (this is OFMdFM parlance for the LGBT community) from prejudice that still exists around them here in Northern Ireland. For an example of such ignorance or why that is required look no further than Mr Allister's question.

First up he calls the LGBT sector a so-called community. Now either he is denying that people of non-heterosexual persuasion do not exist in Northern Ireland, or he is denying that such people have community spirit. If it is the former as the co-ordinator of LGBT Lib Dems here in Northern Ireland I'd better get together with the similar groups in other Northern Irish parties and start to work on a strategy ton contact all the poor deluded people on Grindr or other gay dating sites looking for same sex relationships. If it is the later maybe we should invite Mr Allister to Pride in Belfast at the end of July, to let him see the community spirit there.

However, the other thing about his question is in the language of Mr Allister, just as he refers to the Sinn Féin members of the Assembly with "terrorist" additions to their titles, party name etc, his comments are laced with vitriol to the LGBT community. He brings up the "save Ulster from sodomy" campaign, which is the equivalent to the troubles to the LGBT community here in Northern Ireland. This was were LGBT people were largely afraid to be open about who they were, were they skulked away, giving the impression that they did not exist, because putting their head over the parapet was too dangerous a thing to do.

Yes we still have people who think that way, they will be present at the Pride parade, although last year I counted more Christians in the parade for Foyle Pride than were protesting in such a way against it. However, this small group are very good at dragging their feet. Indeed it wasn't that long ago that DUP members themselves stopped using derogatory and non-inclusive language to the LGBT community in the chamber. Indeed they stopped calling Sinn Féin "IRA/Sinn Féin" long before that happened.

Later on in business looking at Government structures, Mr Alister said that the Belfast Agreement "is a living history and a living act that [the MLA who wrote to Newsletter on Saturday], as the Whip of his party, implements and enforces every day of the week". Yes it is also the first document, see Section 75, that specifically mentioned LGBT as one of the minority groups in Northern Ireland that should be recognised by public bodies, something that a sexual orientation strategy first consulted on back in 2006 would fully bring about. The fact that we are now 5 years on and still have at least another year to wait is yet another example of the heel dragging that is going on at the Assembly over this. Neanderthals like Mr Allister only emphasis the need for this.

Being almost at the point of committing a hate crime while talking about one of the recognised minority groupings in Northern Ireland in the chamber of the Assembly perfectly illustrates just why a sexual orientation strategy is needed in Northern Ireland to match the strategies in place for the other section 75 groupings. As the representative for North Amtrim he has to represent the people, even the LGBT people (and yes there are some of them there too Jim James*), so let's stop dragging our heels or digging up their past hurts and wrongs.

* We are at his behest only using proper names.
Posted by Stephen Glenn at 09:08