There is nothing more frustrating than your political opponents claiming poverty when you knew that their glossy leaflets had to have cost more than anything you were putting out, they were putting them out to every door (using the free* post option through the Royal Mail).

What is worse is the when they say none of the tax payers money is spent on printing a leaflet, while telling lies about how tax payers money might be spent if you vote the other way. One does wonder how Matthew Elliot the chair of the No2AV campaign can face his colleagues now he is back to his day job at the Tax Payers Alliance. When I first saw a certain leaflet when I returned home from work at the Yes to Fairer Votes office I knew there was a cost involved that they were hiding. Now we know how much.

So here is a fisking of that leaflet with a couple of corrections in red. 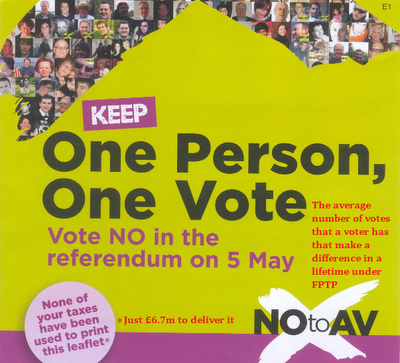 * A misnomer as the cost while free to the campaigns is actually taken up by the tax payer.
Posted by Stephen Glenn at 10:57