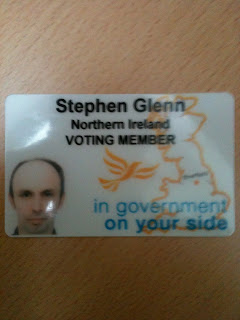 One of the things I have always prided myself on is that I can recruit people to our party with the phrase, you too can make a change to the way we make policy. It is a rather unique  selling point that our party is one that gets together twice a year and any local party can propose policy. Any party member can speak on the policy proposals and any voting rep can then vote on them (anyone of course can then get to be in that last category).

No consider my role as a Membership Development Officer here in Northern Ireland in light of the new regulations regarding police accreditation of those that attend Lib Dem conference. Now not everyone who is politically active over here has a clean police record, there are people on both sides who have done things in the troubles which even now cause ructions but would also in the vagueness of the guideline of how Greater Manchester Police are going to be vetting applications to Liberal Democrat conference(s) be open to exclusion.

Is it possible that I might recruit an ex-terrorist, may be even one with time served into the Liberal Democrats? I would like to think that the way Northern Ireland is moving and the things that the Liberal Democrats stand for that of course that is possible. Looking at the people that I have worked with in the past there are people in other parties in Northern Ireland that are both Liberal and Democratic but just haven't realised it yet. So yeah there is a distinct possibility especially looking at my contacts list. There is also the possibility that somebody with that depth of political feeling would not want to sit on the side lines.

This is all hypothetical, but there is potential a real possibility that an able Liberal Democrat could be excluded from attending conference due to past deeds, even if these are recanted and put behind them. That is in contravention I believe to our federal constitution. It has been a move made by the Federal Conference Committee at the 'request' of the police, but is a constitutional change without the 2/3 backing of conference.

The police should not be the final arbitrators of which Liberal Democrats should be allowed to attend conference, that is for the local parties. My hypothetical but entirely possible Northern Ireland Rep above shows you one reason why.

Update There is now a petition to keep Liberal Democrat Conference Liberal please go and sign it.
Posted by Stephen Glenn at 16:47