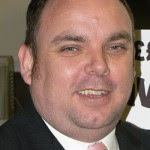 Is it possible to sum up a man in just 10 blog posts, all his passion, vigour, emotions and concerns? No of course not and I'm not even going to say I will. However, what I have done below is put together a collection of ten of Andrew Reeves's blog posts that show the depth of the man, he wasn't all politics and campaigning.

Many of us who knew Andrew always heard of Roger, his husband since January 28th and partner for many years before, but very few of us ever got to met Roger. I even canvassed for Kevin Lang at their front door and got no reply, so called Mr Reeves from my mobile to be sure we could rely on his vote. However, I'm sure the proudest moment of Andrew's life was the day he an Roger got married so I have to start with his report on that day.

Of course in recent months we know that Andrew had another man in his life, Richard Kerrigan, his personal trainer at the David Lloyd gym just down the road from his flat. Those of us know knew Andrew were impressed by the progress his health regime was making. We along with him were convinced it would lead to him having many happy years left with us. Anywhere here is Andrew's blog about that first glance across the sweaty gym.

His mother meant a lot to Andrew. Her sad loss in 2009 was a spur for him to raise money for charity. But it also gave him an empathy with David Cameron when his father passed away last year.

Like me Andrew loved his sports, like me he was a sports fan who, as the header to his blog reads, "happens to be gay". He was a fellow football fan, if one who supported Chelsea can be called, and like me was rather annoyed at  what Sepp Blatter, recently reinstalled dictator of FIFA, had to say about gay fans going to Qatar for the 2022 World Cup, where having man to man sex is illegal.

Andrew loved it when he was asked to write up match reports for the Edinburgh Capitals ice hockey team. Sadly a passion we shared but never got to go see a game together, there was always talk of going to a Capitals v Belfast Giants match. Next time they are in town I will go in honour of my friend. But here is a match report of a game we would have been supporting opposite sides.Victory for Capitals in close match

Andrew would love the fact that his death caused him to trend on Twitter in the UK, especially in light of the fact that just before Christmas the service suspended his account when he retweeted and erroneous ITN staffer's tweet from the business account. Back then the support was immense and no wonder that his sudden passing led to similar outpourings. This is almost like a thank you to all of us for the love we showed him again today.

Looking through Andrew's posts I recall how much his loved the Eurovision Song Contest. Here is what he said about the first time that Graham Norton hosted the show. His Tweet Paper the Andrew Reeves Daily came out today and included this Eurovision song listening to it today the words are somewhat appropriate for Andrew, not that he ever ran scared but listen closely.

Of course there was always a cheeky side to Andrew and he was never one to big up a salacious headline. He would even ejaculate it over and over again on Twitter to make sure you came to have a look at it, including this bit of good news for the men of Glasgow.

But of course Andrew was a campaigner and put his heart and soul into it 110%. You have any doubts about that read this account of just one 12 hour part of his life during the campaign last year. It shows he was human after all.

And finally I'm returning a compliment here. Shortly after I moved to Northern Ireland the top 75 Scottish Blogs for last year were announced. Andrew wrote "Stephen Glenn leaves a great legacy in the Macblogosphere - and although only over the sea, we miss him loads." The same to you Andrew, the same to you. Sadly you are not just over the sea, so our missing of you is more permanent than my transient one.

Fittingly On this saddest of weeks there were three blogs (including this one) dedicated to Andrew in the Lib Dem Voice Golden Dozen top 7 as well as his last blogpost.

Update: Although this made the Lib Dem Voice Golden Dozen and was a sign of how much Andrew was loved and will be missed by many, via Facebook I recieved this comment from his partner Roger, which made me shed a tear when I read it, but made the tears of going over Andrew's blog worthwhile to create this post.

Stephen. Thank you so much for this. I have cried and laughed at it. I never used to read Andrews blog much. But this was fantastic. He loved to blog. He even said on Wednesday he should blog more, but he didn't have the time. Thank you again Rogx