Our Wee Country ain't bad with a wee white ball

For a Wee Country Norn Iron is renowned for punching above our weight when it comes to sport. We've been to three world cups. Two men from here have run three World Snooker titles and more than our fair share of Olympic gold medalists (especially in boxing).

However, as somebody said over the weekend for two men from Northern Ireland to win back to back US Open golf titles must surely have been up there at lottery odds. That is except one 22-year-old from Holywood when told about that quote said, " Well, I though I had a pretty good chance." 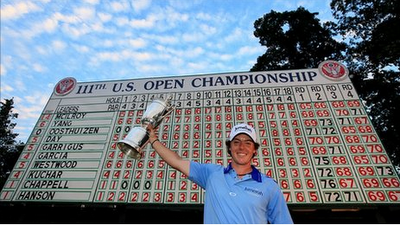 He had a point, he'd been in the lead before yesterday's conclusion in 6 of the 7 rounds of major championship golf this year. The previous two last year's Open and PGA he was tied for third. So yeah that would have been pretty good form. Of course there was one elephant in the room. The implosion that he went through after leading for 3½ days on the back nine of the final day at the Augusta National being the reason.

There was none of  that last night. Sure he dropped shots on twice as many holes as he had the rest of the weekend, that took his total to 4 holes and 5 dropped shot. He did eventually 3 putt on a green, but that was the 71st and that was when he was already home an dry, the closest anyone got to his score all day was when Y.E. Yang birdied the 10th to go nine under, but he'd birdied it himself, after just missing a hole in one by 8 inches to go to 17 under. it may not have been his best round of the week, a meer 69, to go with the 65, 66 and 68 from the previous days. But that made him only the third US Open Champion to break 70 on all four days.

He's from just up the road at Holywood, he learnt his golf just around the corner at Bangor with the club pro. He is Rory McIlroy. What will be capable of next month at Royal St. Georges in The Open. He's now led after 7 of the 8 rounds of major's golf this year. He grew up playing the Northern Irish links including an audacious 61 for the course record at Royal Portrush (the home course of Graeme McDowell last year's winner) aged just 16.

Our wee man with the curly hair done grand, so he did.
Posted by Stephen Glenn at 09:01