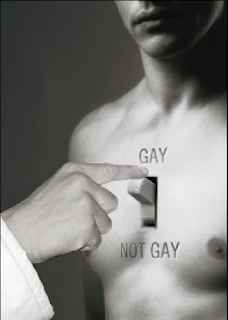 Today is one of those strange days. As soon as this story broke on the BBC website I would have expected a DM from Andrew Reeves either asking me for details, or telling me he was going to blog about it, or already had and would I like to comment.

His blog post would of course taken the line that no religion had any place to say anything about being LGBT, my riposte would of course have mentioned that the church needs to recognise the LGBT members within their midst that have not turned their back on them despite the church turning their backs, all too often, on them.

You see today in Northern Ireland one of Iris Robinson's 'christian' psychologist friends David Pickup is in Belfast to promote reparative therapy. The group holding a one day seminar up at Belvoir Parish Church, CORE supports "men and women with homosexual issues who voluntarily seek change in sexual preference and expression". They see having same sex attractions as an illness that is there to be cured. They see it is being a lesser option that being straight. They see it as something that through therapy can be suppressed and heterosexual lifestyle and feelings comes into its place. They say there is some sort of switch that can turn off the same sex attractions that LGB people feel. There isn't, I've tried TWICE. They say they love LGBT people, but pressure them into feeling lesser, to feeling that they are constantly failing, from a holier than though, judgemental stand point.

Forgive me if I am wrong or stepping out of line here but part of the bible tells me I should not bear false witness. You may have heard of that bit, it is the ten commandments. Now the fact is that I am attracted to other men. That does not necessarily more that one at the same time and be promiscuous. I can be so in love that I only have eyes for one man at a time, just as a heterosexual can only have eyes for one person of the opposite gender.

I don't have issues with that. At fifteen and sixteen because that is what the church seemed to imply, or on the rare occasions it was talked about tell me straight. My church now does have some pastoral guidelines on people with same sex attractiveness. It does come over 20 years after I needed pastoral guidance, although I doubt under the guidelines at present I would seek such pastoral care at that age. My profession of faith, enough to become a member of the church, is not sufficient, now is my preparedness to donate to church funds all because of my sexuality and more to the point my not wishing to hide it under a bushel: not that I'm shouting it from the rooftops either in the confines of any Presbyterian meeting house.

See I'm a Liberal Democrat, as such I don't think anyone should be enslaved, by poverty, ignorance or conformity. The people at the seminar in Belfast today are ignorant of the harm that reparitive therapy can do and they are trying to make people who are difference conform to a norm. They say willingly, but it is most often merely so that they fit in that they submit to this. There are people out there who are Christian, or of other faiths, and LGBT.

There is a protest up at Belvoir Parish Church handing out leaflets to highlight the harm that this approach to LGBT people within the church can cause, but because of all manner of commitments I am unable to attend in person. There is a growing open LGBT community in Northern Ireland, because of our religious nature a lot of that community is of faith and have struggled, or are struggling, with that dual persona themselves. It is not an issue they have with themselves, but an issue of how the church and fellow Christians perceive them.

Thankfully according to the BBC only 15 people were inside this morning attending the seminar.

Just seen  David Pickup on the lunchtime news. He says that gay is a lifestyle choice and wasn't around 100 years ago. Maybe we should tell to Edward Carson QC, whose statue is outside Parliament Buildings, whose judgement in favour of the Marquess of Queensbury in the libel case brought by Oscar Wilde in 1895, led to a warrent being issued for his arrest for gross indecency* upon leaving that trial. The eventual 2 years sentance of hard labour obviously mistaken as there was no such thing as gay 100, never mind 116 years ago.

* Homosexual acts not amounting to buggery.