No five day week for the Royal Mail stamp design team as Team GB continue to bring on the Gold rush.

Over at Greenwich Park our show jumping team of Nick Skelton, Scott Brash, Ben Maher and Peter Charles were taken to a jump off by the Dutch team, but they had three clear rounds in  the jump off while the Dutch had three fences down between two riders so they couldn't discard both.

The gold paint will be out for post boxes in Peebles (Scott Brash), Alton (Peter Charles),  of Bishops Stortford (Ben Maher) and Alcester (Nick Skelton) 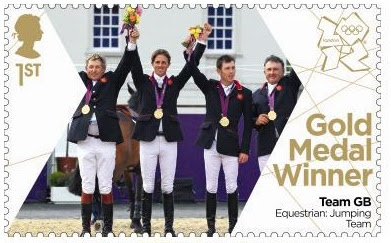 The second stamp is for someone who already has a share of one. But this one is on his own. Some thought that when he was picked instead of Sir Chris Hoy who was looking to defend three golds from Beijing that they were stopping a legend. But Jason Kenny has he second gold from these Games in individual sprint to go with the team one, his third overall and going with the silver in this event four years ago behind only Hoy. So Bolton will get a second golden post box. 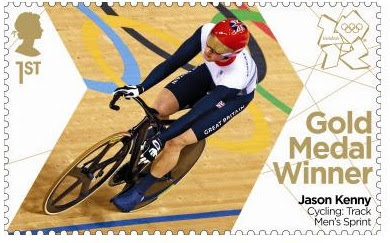 We talked about this team being Team GB's greatest team. Well with six more days of competition they are one short of the target from Beijing with three very good shouts in the cycling tomorrow with Hoy in the Keirin, Victoria Pendeton in the women's sprint and Laura Trott leading the Omnium after day 1.There are also the Brownlees in the triathlon, Robbie Grabenz in the high jump plus the chance of more horsey gold in the Team Dressage. So we are close to nut just equaling Beijing but zooming past that total.