Yes I am just going to keep the numbers progressing, the Paralympics are still part of London 2012 and the Royal Mail are issuing 2 stamp mini-sheets for each of the Gold Medalists in GB Paralympics team over the next 11 days we didn't have to wait very long for the Gold rush to resume.

First up was Sarah Storey in the women's C5 individual pursuit at the velodrome. If you missed her in qualifying in the morning she captured her opponent not once but twice on the way to a new world record which would have put her in good standing with the top women cyclists with both hands. She captured again in the final. So she will be the 30th stamp issued by the Royal Mail for the Games but the first for the Paralympics, and will have a gold post box in Manchester. It is her third Paralympic gold in cycling (after 2 in Beijing) to add to her five in swimming (Barcelona and Atlanta) before an ear infection caused her to get out of the pool and unto her bike for fitness only to find she was competitive there too. 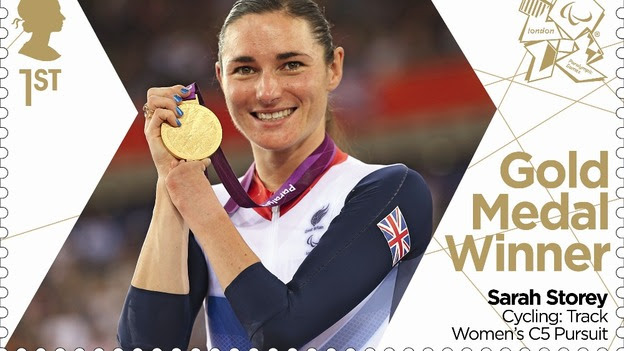 Next up it was in the pool where after a number of silvers Jonathan Fox took the first gold in the pool in the men's S7 100m backstroke. It was an upgrade from his silver in Beijing and although not as fast as his world record time in qualification it was enough to fend off the opposition. There will be a gold post box for him in Plymouth tomorrow as well as this stamp. 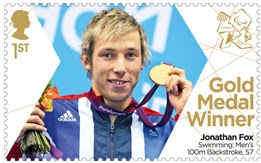