Ireland came to a stand still before 5pm today.

The Katie Taylor carried their flag into the Olympic stadium. She has previously played Gaelic and Association Football, in the latter she has scored for the senior ladies team. But at the ExCeL arena this afternoon the stands were full of Irish fight fans (who I think were cheering on Nicola Adams in the previous fight on the card the Flyweight final) to see if Ireland could claim their first gold.

Taylor is the reigning European and world champion, indeed she has a long golden trail in both those championships. She was facing Sofya Ochigava from Russia herself a past European and World Champion, but the last time they met she had lost to Taylor in that World Championship title fight.

The final was a tight affair on the scoring going 10-8 over the 4 two minute rounds, but it  was in favour of Taylor, securing Ireland's first gold of these Games only 24 hours after they won their first medal. 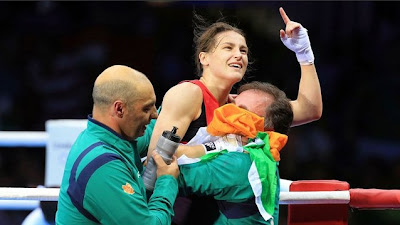