My university town was close to some of the Olympic action, the torch sailed past it on opening day and the cyclists rode through it both in the road race and the time trails. 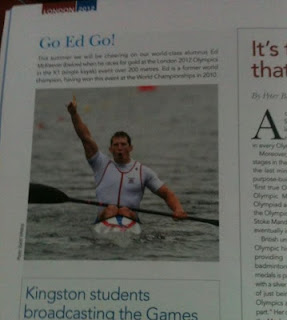 But our summer Alumni magazine looked at all sorts of aspects in which our Alumni were involved in the Games from designing the livery for the nine British Airways Olympic jets, to broadcasting (including a previous Olympic medal Alumnus Gail Emms in the badminton plus 155 students gaining experience in their fields), to being part of the Olympic ad hoc Court of Arbitration for Sport. But one aspect was like me one of Kingston Universities sporting alumni and he had a real chance for gold as he was world champion in his event in 2010.

He event was new a shorter canoe sprint over just 200m of the course at Eton Dorney just up stream from our University town. Yesterday morning he did strike gold making it at the time 26 for Team GB.

For the former Polytechnic it was to be a second Olympic medal following Emms's silver 8 years ago, but Kingston University's first gold.
Posted by Stephen Glenn at 12:48