Another three gold today so the Royal Mail were busy again, and were probably relieved that Rebecca Adlington didn't give them a late Friday night.

I'm not saying that appearing on a stamp was the added incentive that Katherine Grainger needed to turn silver into gold, but along with Anna Watkins this makes a welcome addition to the philatelists' collections. 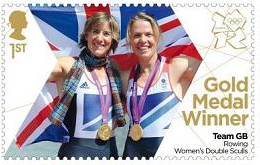 It means that Aberdeen will get a SECOND golden post box to honour Grainger, the other was for Tim Baillee yesterday, and one in Leek, Staffordshire for Anna.

Of course next we have Geraint Thomas and Ed Clancy helping to defend their Olympic title which they won with fellow stamp appearing Bradley Wiggins along with Steven Burke and Peter Kennaugh. So Wales and the Isle of Man will get golden post boxes for Thomas and Kennaugh in Cardiff and Douglas, Clancy's hometown of Huddlesfield and Burke's of Burnley mean one for each of the Roses as well. 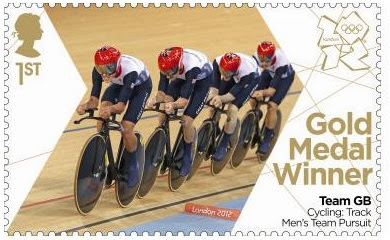 And finally Victoria Pendleton gets another Gold stamp for the ladies in the keirin. Stotfold in Bedfordshire should be getting a gold post box for Victoria's acheivement. 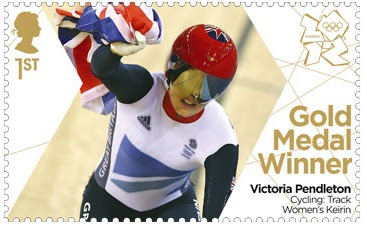