Today was the day that Katherine Grainger started in her fourth Olympic rowing final. After six world titles she had never managed to stand in middle of an Olympic podium. Indeed in all three of the last Olympics she has been in the second spot. Silver in the Quadruple Sculls in Sydney 2000, in the Coxless Pairs in Athens 2004 and again in the Quad Sculls in Beijing 2008. 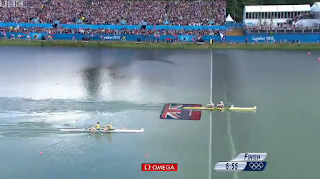 But in the double sculls with the women who will become a pub quiz answer in years to come, Anna Watkins, she had long been tipped to end the drought of British women's gold on Olympic rowing lakes at Eton Dorney. Of course the other day Heather Stanning and Helen Glover took that first away from Kath.

But today on the rowing lake the two of them got off to a start leading from 100m out and never giving the lead away. Reaching the line with half a length advantage over the Australians to finally claim a gold for Kath Grainger.

Elsewhere at Eton Dorney today George Nash and Will Satch in the men's pair like the women's pair before them thought to have been a make up crew took bronze. While a second medal will be heading to Coleraine after these Games as Alan Campbell added to the Team Northern Ireland medal total with a bronze in the mens's single scull.

The women are so far leading the way in the rowing with 2 golds. But with the final day of rowing finals tomorrow we may see some more medals to go with the 2 gold, 1 silver and 3 bronze Team GB now have.
Posted by Stephen Glenn at 16:19