Yet another UUP member has called homosexuality a disease, but unlike Lord Maginnis this one is an elected representative*, Magherafelt councillor Jackie Crawford. Two other DUP members also spoke in the chamber calling homosexuality an abomination.

Cllr Crawford's comments came before, during and since a Council Meeting on Tuesday which discussed Sinn Féin's proposal supporting Same Sex Marriage. Speaking in today's Irish times he said:

"I'm not against gays, it's a pity for them.

"It’s a pity they have that disease and they can't help it. It's the same as you being born with a disability. They can't help what they are.

"I know gay people and they are nice people and not bad people but they should not be getting married."

There is rather a lot there. In saying it is like being born with a disability at least the member bizarrely recognises that being gay is not a choice, though it is not a disease. However taking his comments about people like that not getting married does that mean he is against people born blind, deaf or with a physical disability getting married to?

Looking at the context of what he says surely that is implied.

However, the UUP Councillor may notice in the Paralympics coming up there is no category for Gay sportspeople, although there are some gay people such as equestrian Lee Pearson in the GB team. There was also his opposite number Carl Hester also gay in the same event in the Olympics. You see being gay isn't a disability. No medical board will recognise it as such, so if Cllr Crawford, who is not a medical professional, were to have done his research he would have found that out.

It's a pity for him that is clearly ignorant on such matters.

It is a pity on the LGBT people in Magherafelt that one of their councillors considers them disabled.

The DUP use one of the 67 biblical uses of abomination (KJV), yet I don't see them attack Magherafelt's pork producers as the eating of swine is an abomination (Is 66:17), of those gormet Ostrich burgers (Lev 11:16) that come with continental markets, or of course prawns, or muscles or whelks (Lev 11:10-11). Do they stop their wives dressing in trousers, or their daughters looking like young men (Deu 22:5). Or how about all the lies that they themselves have told (Pro 12:22), or the discord they spread maybe by insisting on walking a certain route on the 12th (Pro 6:19), and I could go on.

Mike Nesbitt is going to speak to his councillor, I doubt that Peter Robinson will be doing the same to his. Indeed while the UUP leave it up to individual members as a matter of conscious the DUP say they are opposed to equal marriage and are allowing their members to quote whatever scripture they want even to argue against civil law. But while unionists continue to use archaic medical definitions or biblical language out of full context to protest against the groundswell of support for marriage equality they are failing to be representatives but merely reactionary zealots who are not fit for purpose as public representatives of a non-homogenised community.

* Apologies as this link is now no longer available, I hope the NewsLetter are merely updating the story, it was a software upgrade that has moved the link to here. 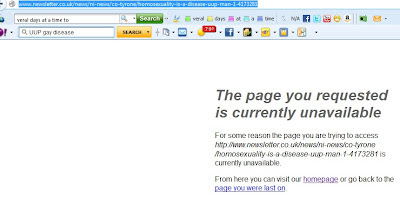 Update I notice that David Vance takes a hardly surprising alternative view on this issue, but he does raise four points that he says need sorting out.

First off, is gay marriage the pressing issue for this Council? Really? I would have though lack of jobs, a run down town centre and high rates would have registered before "gay marriage". The utter banality of local Government.

First off I recently had an argument on Facebook with the Alliance's MP about the pressing nature of this debate. The words used as to why they had not taken a position on marriage equality before it was discussed in Belfast City Council in June was that it was a pressing issue. Yet with Scotland having said they will introduce legislation and England and Wales also about to announce their plans, there are issues about freedom of movement of same sex married UK couples that will be arising, so Northern Ireland do need to discuss these sooner rather than after legislation comes in elsewhere in the Union.


Second, homosexuality is patently NOT a disease. The Councillor concerned chose his words badly but then again he is a Councillor so perhaps that explains it!

Wow! Apart from Vance saying that homosexuality is not a disease there is a lot wrong here. If the words used were a one off they were chosen badly. Thing is he was asked by the Irish News to explain himself and dug deeper. Being merely a Councillor is no excuse, he is still a public representative speaking in a public domain. Such uninformed misunderstanding of some of those he actually represents and apparently has met is totally unacceptable. If he really is merely a Councillor who knows nothing about this issue (which is a fair point for Councillors on any number of issues) he is more than capable of staying quiet, or saying I need more time to research this. The thing is he did not do that and spoke his mind, not matter how uninformed or outdated what is in his mind happens to be.

Third, what about the DUP Councillors who reckon gayness "an abomination"? No media focus on them.  Oh my, our Pravda media playing up to Peter and Marty, again?

DUP elected representatives calling homosexuality an abomination is hardly news. It is something I have heard from that party since my teens. It is something that the First Minister's own wife was heavily slated for saying in a Radio Ulster interview a few years ago. However, what I do agree upon is that even though it is nothing new it is still something that we should not let slip under the radar, as indeed I haven't above.

Lastly, I notice this was a Sinn Fein motion. Once again we witness THEIR total detachment from reality and their self serving selection of topics to pursue even as the country goes down the drain!

Actually  David I think it is your total detachment from reality that is the issue here. You have missed the point that Equal Marriage NI is up and running. That they have recognised that within the devolved powers Stormont stands alone as not introducing any home grown LGBT equality legislation and therefore is working with whoever is prepared to take things forward. Steven Agnew of the Green Party has tried, and so far failed, to get this discussed at Stormont and now Sinn Féin are getting this unto the agenda in various council chambers. As the LGBT community is neither nationalist nor unionist that means we can work on a shared future with whoever is prepared to stand up with us.