Athlete excluded from one final of amost impossible double #London2012 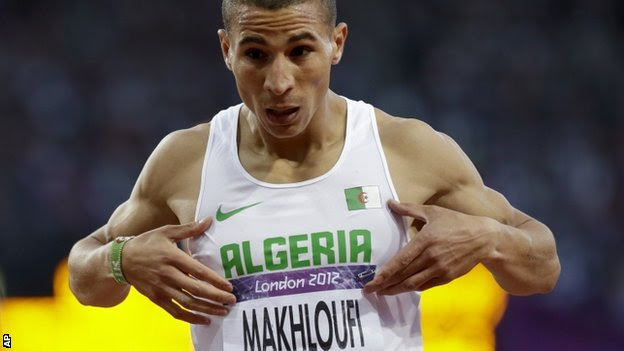 I have no idea why the first round of the men's 800m is taking place today between the men's 1500m semi finals and the final. Historically to allow doubling up one of these two events have been completed before the other began. But this rather bizarre scheduling has claimed a victim.

The easy winner of the first semi final yesterday Algeria's Taoufik Makhoufi lined up today in the heat five of the 800m. When the runners entered the back straight he was already far behind and by the end of that straight he had stepped off the track.

But he has been excluded from the Games and all future participation in these Games just like the badminton players in the women's doubles. His offense is the same of not trying hard enough. His federation had failed to withdraw him ahead of yesterday's deadline. His federation may be regretting the pride with which he showed of his nation's name on his running vest last night after qualifying for tomorrow's night final which is actually in the same session as the 800m semi finals.

My personal opinion is that the IAAF have made the middle distance races an impossible schedule for anyone who wishes to double it. Sadly rather than getting around the 800m one of the athletes that was entered for an almost impossible schedule decided to take matters into his own hands which has cost him that final he did try for.

Update he has been reinstated.
Posted by Stephen Glenn at 15:02