The first medal races in the Olympic regatta brought mixed fortunes for team GB boats. First up were Iain Percy and Andrew Simpson who had led the Star class all week.  They just had to beat the crew of Brazil skippered by Robert Scheidt of Brazil (once Ben Ainslie's nemesis from Atlanta and Sydney), without letting the Swedish pair of Fredrik Loof and Max Salminen get too far ahead. In effect even if the Swedes won they could have finished 6th.

The rounded the last mark in gold medal position and forced the Brazilians behind two other boats. The for the final down wind reach they were looking good seemingly in fourth place with a few hundred metres to go and still ahead of the Brazilians. But there was a change in wind advantage in those final metres and the entire fleet around them seemed to surge further more and they ended up in 8th one spot down on the Brazilians, but as the Swedes had indeed won the race they would take gold. 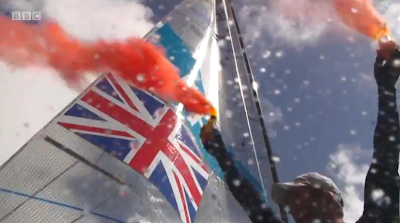 The second medal match of the day saw Ben Ainslie in the Finn going for his fourth gold in sailing which would have been a new Olympic record. But unlike Percy and Simpson and indeed himself in past Olympics he had never led the regatta. He had managed to pull it down to a one place race between himself and the Dane Jonas Hogh-Christensen but he was also awat that if the Dutch sailor Pieter-Jan Postma were to win or come second he could take on Christensen at the back of race one on one.

After chasing Christensen round the committee boat at the start but failing to affect his race Ben got off to racing. After the fourth leg he ended up in second and started to mark the Dane as the Dutch sailor didn't seem to have the position to overhaul him. When they rounded the last mark Postma was in fourth and Ben was marking the Dane at the back of the 10 boat fleet, however the Finnish sailor almost getting in the way. But on the downwind the Dutch sailor was making up places and what must have been a nervy leg for Ainslie, but he had to tack late to be able to get around the bouy and as a result dropped down the fleet.

It meant that Ben had done enough and when he crossed the line he knew he was Olympic Champion once more. With four golds and a silver he has just beaten another Dane, Paul Elvstrøm's record. He also said in his interview afterwards while still on the water that it was unlikely that we would see him again in Rio in four years time, because the atmosphere here in a home Games would be hard to beat and it had been a tough week. But what a way to bow out of Olympic competition. Maybe now he will find a way to focus on America's Cup or other competition.
Posted by Stephen Glenn at 16:19