Well no rest for the Royal Mail again today, although with only 2 stamps to produce it has been a little bit of a breather after yesterday's magnificent six.

First up is the man who if he didn't get his own stamp it would be a great shock. But in making history as the most successful Olympic sailor Ben Ainslie with his fourth gold earns his stamp. They often say that you don't have to lead until the final line is in sight. Well this year that is just what Ben did never leading the regatta always chasing Jonas Hogh-Christiansen, until today in the medal race and he took he on head to head and it appears that that is the kind of medal race that Ben relishes and never comes out second in. The village of Restronguet in Cornwall will see their post box turn gold tomorrow in their most famous son's hounour 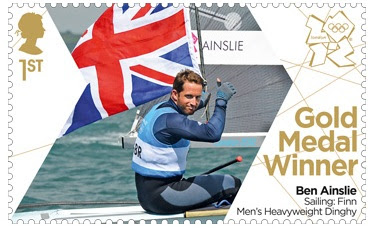 The other stamp is to celebrate the first winner of a men's singles final match at Wimbledon since 1936. Just 4 weeks after he lost on the same court after being the first British man to make a Wimbledon final he faced the same opponent. This time he won the first set, as well as the second and third against the same opponent. So Andy Murray now has the Olympic Gold part all he needs are the slams for a Golden career slam. Dunblane will have a golden post box. 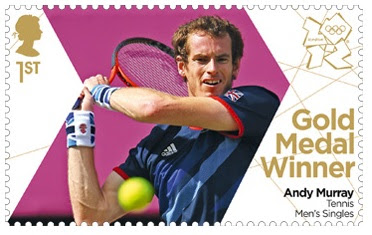 Will there be more tomorrow? Well we have the track cycling sprints so the chances are high.
Posted by Stephen Glenn at 21:55