Why clubs feared the fans over Newco choice 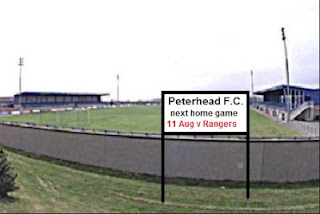 One thing that came across from the Rangers Newco decision today was the power of the voice of the fans. While the top brass of the SPL, SFA and SFL were talking about financial Armageddon the clubs were hearing a different story from the people who pay for the daily costs of keeping a club going the fans.

Reading forums and watching twitter in recent weeks one thing was clear, the fans were of a fairly universal in their view of what decision had to be made today. Looking at the statements made by clubs in all divisions from SPL down they also were receiving that message loud and clear.

If integrity had net been upheld but some special conditions had been made for Rangers they would have turned their backs on teams, with holding support and much needed revenue. In all likelihood fans would have travelled to Glasgow's East End but refused to go into the stadium. The first day of the season may have seen masses of empty seats and terraces.

You see the fans in the lower divisions know about the fear of financial insecurity. Indeed some at Livingston, Dundee and Airdrie United have been through decisions like that the SFL faced today. Others may well face it in years to come. They wanted the same conditions to be played out universially knowing that any future decision would be clouded by any decision other than relegation to Division 3 occurred.

So the fact that 29 clubs voted to admit Rangers as an Associate Member of the SFL was not surprising (Dundee with a vested interest were not allowed to vote). That then 25 Clubs voted that this should be in Division 3 rather than 1 (I'm not sure if other clubs abstained here due to vested interest of promotion). This shows that the Chairmen were listening to the fans. They were not being bullied by the powers that be who wanted an alternative solution. The fact that they called for a 42 game solution shows that they were not happy even with the SPL2 proposal being a way to distribute finance down the league in a way that is helpful to all clubs.

If the SPL do bring the idea of SPL2 back to the table I expect the Division 1 Chairmen to remember the call of their fans which they followed today and to turn down the invites to join a rushed through restructuring that will appease Servco (the Rangers Newco). There has to be looks at the league structure the whole way down. Even a regional third tier, but this is not the sort of thing that can be pulled together in a few short desperate weeks to appease the 'establishment' club that resides at Ibrox.
Posted by Stephen Glenn at 15:49