Yesterday was the 45th Anniversary of the death of the first British rider to wear the famous Maillot Jaune, Tom Simpson. So how did a Brit who was wearing that jersey for the most consecutive days go about marking the day?

Well on the day's first climb the Col du Grand Cucheron he showed us his own climbing legs near the summit by going after a small break away on his own, without the aid of his now famous Sky Mountain Train.

However, up the road there was a small breakaway which after the second climb the Col du Granier consisted of five riders. Jean-Christophe Peroud (AGM), Egoi Martinez (EUS), Cyril Gautier (EUC), Robert Kiserlovski (AST) and Britain's David Millar (GRS). Kiserlovski who is the team mate of King of the Mountains Frederik Kessiakoff took first place on both the category 1 climbs, with Peroud second.

On the descent of the Col du Granier David Millar made sure that the escapees kept working as behind them Peter Sagan (LIQ) in the green jersey who was in a pursuing group looking for the sprint points. This groups was pulled back by the work of Orica Greenedge working for Matt Goss who was second in the point contest, and once they recaptured Sagan they let the leading five get away again. It also allowed those riders who were dropped including Mark Cavendish and André Greipel to get back into the peleton. The leading rider in the lead group was Martinez over 25 minutes down. So they were allowed up to 12 minutes up the road before getting begged back, but were allowed to stay away.

When it came to the intermediate sprint Orica Greenedge's work paid off as Goss took the 10 points for 6th and Sagan was three places back in a four man sprint. Cavendish didn't take part which suggests he is now only interested in the stage wins that he can grab up the road. 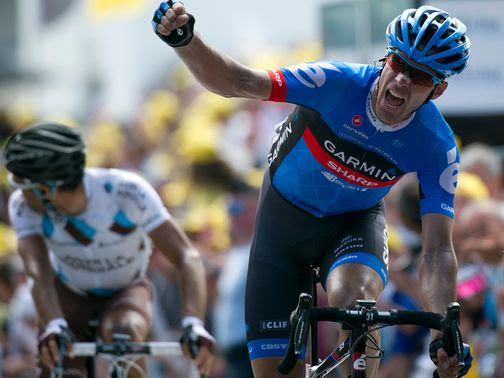 There was the 3rd Category climb just before the finish town, but none of the lead group attacked. Then Martinez tried a couple of times, only for Millar to bring it back. Then with 2.5km to go Peroud made his move again it was marked by Millar and none of the other were able to get unto their wheels.

Coming towards the finish Millar was in the lead watching Peroud and waiting for the moment he'd open up his sprint. When he did about 200m from the line Millar was ready for him and powered back up alongside and ahead. It was his first stage of Le Tour since 2003 and his fourth but second open race stage win.

In his comments afterwards he said it was an honour to win this stage on the 45th Anniversary of Simpson's death, especially for him who once like Simpson used drugs, but who now was clean in the cleanest period of the sport, and the fourth member of the GB Road team for the Olympics to have won a stage this Tour. Only Ian Stannard has not but he is not at the Tour.

Today's stage is the return to Cap d'Agde which was the start Tour for stage 5 in 2009. It was what appeared to be an innocuous stage along the Mediterranean coast until the wind put several splits in the race. Today as the road turns this way and day around Montpellier and then along the coast there may well be a similar wind affected race. Then Thomas Voeckler was in the breakaway and one of the two who stayed ahead to take the win, in the lead group on the road were all of Mark Cavendish's HTC team who piled on the pressure and made it impossible for anyone who missed the move to get back. He sprinted for the top spot of the chasers only 7 seconds back.

Today just 23km from the end and the race along the spit of land into Le Cap d'Agde there is a 3rd Category so to be there for a potential sprint finish a sprinter has got to be able to get over this with the front of the race. With Cavendish not chasing the intermediate sprint yesterday or being present at the end he may be saving himself for this stage. The only 'flat' stage before the race enters the Pyrénées although in two days the run into Pau is also flattish.

As Mark said after he won his only stage so far this year he knows he is only one sprint win behind André Darrigade so he is looking for a chance to do something about it. Though he has twice been held up by crashes on the road I'm sure his hunger is still there and he'll want to equal that record before Paris, I'm sure and there are only really three chances left today being one of them. Though Goss is still looking for a stage win having won sprints at intermediates and of course Greipel should not be ruled out.

Two sprinters who will not be there for the final mix are Mark Renshaw (RAB) who abandoned in stage 11 and Alessandro Petacchi (LAM) who was outside the time limit and eliminated on the same stage. Petacchi has crashed on the descent of the Col de la Croix de Fer and had suspected broken ribs before trying to get paced to the finish by his team mate Yuriy Krivtsov
Posted by Stephen Glenn at 07:59