Apparently yesterday there were two first category climbs. This was meant to mean that Peter Sagan (LIQ) would have been dropped from the lead group he set up after his second attack was successful in getting away on the second of these when the road ramped up. It also meant that Mark Cavendish should have been dropped early on the first one rather than leading the peleton over it.

Neither of these things came to pass, although there was an effort to achieve the first from Luis Leon Sanchez (RAB), Sandy Casar (FDJ), Phillipe Gilbert (RNT) and Gorko Izagirre (EUS) tries to do. However, the Green Jersey pulled himself back and actually dropped the latter two before the summit of Mur de Péguère. Only Sandy Casar who had made a bit of a move when he saw the Green Jersey come back at them was up the road, but he was soon swallowed up by the swiftness of the Slovak's descent.


Behind them however, chaos ensued. When it came to the steep ramping section Cadel Evan's did make a push for the top. But while many were dropped all of the GC contenders were in that group, Wiggins with a couple of his Sky team mates, even Michael Rogers climbed back to the lead group to join Porte and Froome in that supportive role. Evans with only Tejay van Garderen in the white jersey for support.

However, when  they reached the top Evan's pulled to the side having shouted for his young team mate and swiftly removed his rear wheel. Van Garderen continued on over the summit, seemingly unaware of what was happening behind. With the road being so narrow at the summit of Mur de Péguère none of the team cars or neutral service cars were in close attention to the leaders at that point. Evans waited for what seemed like an age before he saw his team mate Steve Cummings approach who should have been able to swap rear wheels with Evans if only his were not also deflating. Finally two more team mates including George Hincapie turned up to the rescue, and just after them the neutral service car.


What we soon found out was that there were numerous punctures at that part of the route. Unusual on an uphill section where the riders are not braking. One rider the King of the Mountains Robert Kersilovski (AST) broke his collarbone on a crash on the descent but there were riders all over the road getting tires replaced. Evans himself having three replacements.


Up ahead while the escapees fought on to try and stay away the yellow jersey showed his leadership of the race and called a truce when it became apparent that something untoward was happening behind. Even he took a change of bike. Only one rider Pierre Rolland (EUC) seemed to not understand what was going on and attacked from the main group. It became clear that there were carpets tacks that were causing all the punctures and also getting into the tires of support vehicles.

Down on the road into Foix, Luis Leon Sanchez launched an attack to try and shake off Sagan, which would prove to be the decisive move of the day. Lotto-Belisol and Liquigas managed to pull back Rolland and the Evans group after waving thanks to the team cars rejoined the main group. Sagan led the remaining four over in second to secure 37 out of a possible 40 points in a mountain stage, surely enough to mean nobody can challenge him for the Green Jersey unless disaster strikes.


Elsewhere with Kersilovski out of the race the Polka Dots revert to his Astana team mate Fredrik Kessiakoff. 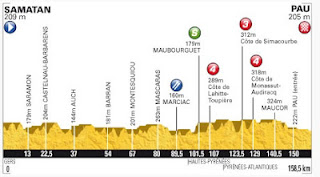 Today's stage to Pau is a relatively flat stage and therefore should suit the sprinters. But then we all said that about the stage into Cap d'Agde on Saturday and look at the problem the Category 3 climb caused then.


Today there is another Category three climb mixed in among the rolling parcours as we skirt around the north of the Pyrénées but it is 45km from the end and not on the coast therefore getting affected by cross winds.

The way Mark Cavendish (SKY) climbed the first Cat 1 climb yesterday suggests to me that he wants to get over all of these lumps today to be in that lead group. So with Greipel (LOT), Goss (OGE) and Sagan (LIQ) there may well be a contested sprint between those guys at the end. Cav is still looking for that illusive 22nd Stage win to equal André Darrigade for sprint wins. with Sky riding well in the closing stages to keep the yellow jersey safe what are the chances of his old Madison partner leading him out in Yellow as he did for Boasson Hagen the other day for that other piece of history?


I don't expect any major shake up in any of the other classifications today, that will be saved for after tomorrow's rest day.  But
Posted by Stephen Glenn at 09:04