Cadel Evans (BMC) was dropped once against yesterday and this time there was no truce and no limiting of losses, nor was Tejay van Garderen required to hang back with the rest of the team to help the team leader.

But who is the new King. It should be Bradley Wiggins. But if some misfortune overcomes the Maillot Jaune today Sky still have the fall back of Chris Froome. Vincenzo Nibali (LIQ) tried again yesterday to break the Sky one-two but if Froome wasn't pacing Brad back to his wheel, Wiggo was doing the same for Chris. The stage yesterday saw the three of the them locked together taking time out of all the other contenders. Jurgen van den Broeck (LOT), Haimar Zubeldia (RNT) and van Garderen were in the group 58 seconds down lead across the line by Nico Roche (AGM).

Early on there were 38 of the 152 riders still left in the Tour in a breakaway up the field. That is 25% of the race, just not any of the 10% that matter. In that Group was Thomas Voeckler (EUR) who ended up taking the top spot on both of the Hors Catégorie Climbs of the day and both the 1st Category Climbs. On the Col d'Aubisque second over the top were the Polka Dots on the back of Fredrik Kessiakoff, who was 4th over the Tourmalet but was outside the top 6 for the Col d'Aspin and the Col du Peyresourde, with only 34 points on the day Kessiakoff ended the day with 4 points less than Voeckler in the King of the Mountains.

Voeckler who attacked alone for the last climb and with only Brice Feillu for the one before that was not surprisingly the comabtive rider of the day as well as winning the stage by 1'40". 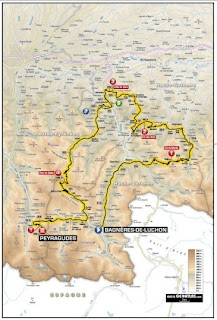 Today's stage in the final Mountain stage of the Tour. It is over 143km not all of them new to this years race as once the road circles around to Saint Aventin it is back up the Peyresourde in the reverse direction to yesterday before a short part of the descent before turning off the the left for the climb to Peyragudes.

After 17km of today's loop though the road starts to go up with the first category Col de Menté, the 15th time this has been a mountain in le Tour. In 1971 it was tackled in the direction we are going today on the way to Bagnères de Luchon during stage 14. Eddy Merckx was 7 minutes behind Luis Ocaña in yellow at the time and on the decent both men were taking risks, Merckx fell on a bend into a retaining wall, Ocaña following close behind could not avoid him and crashed himself. Although Merckx was up and off again quickly Ocaña's couldn't release his toe clips quickly and Joop Zoetemelk collided with the prostrate Ocaña. The Spaniard was helicoptered off the mountain his Tour over and the following day Merckx refused to wear the Maillot Jaune as a mark of respect.

Without that crash, which is marked by a memorial on the spot as they came down it is possible that Merckx may not have been one of the five time winners of Le Tour. But it is a constant reminder to all leaders that the race is not won until all the corners on all the descents are negotiated.

After the Col de Menté there is a relatively flat section of today's race. Although the category 2 Col de Ares and Category 3 Côte de Burs do intervene. Then at 95 km into the stage the climbing resumes again in earnest.


First up is the 11.7km climb up the Port de Balès which is only in it's 3rd Tour having featured in 2007 and 2010 previously it is the day's only Hor Catégorie climb. The Average gradient is 7.7% but there is a three km section that averages over 9% 5km from the end. If Vincenzo Nibali still has any designs on winning this Tour it is likely to be at that point that he is going to have to attack. The descent is not likely to allow him to pull out a gap on Wiggins and it is doubtful that the gentler climb of the Peyresourde before taking the addition to Peyragude is going to going to offer him much opportunity to gain enough time.

After 16.5km of descending the Tour will find itself on familiar roads as for the next 12.5km they are going back the way they came yesterday. As they summit the Peyresourde and take part of the descent before turning off up to the Peyragudes ski station. The final climb itself is less than 3km, but along with the Peyresourde it is counting as a 1st category climb. There is a km of flt racing at the top and if Nibali reaches the plateau with Wiggins and/or Froome in close attendance his Tour is over and he will only have a podium position.

There are 62 King of the Mountains points on offer today, twenty of them for the mountain finish and I doubt that either Voeckler nor Kessiakoff will be there to pick up those. With Chris Anke Sorenson 40 points behind Voeckler and with only a maximum 7 more KoM points available between Peyragudes and Paris today should be the day that the Polka Dot Jersey finds it final recipient. if neither Voeckler nor Kessiakoff pick up any early points from a break away though it may come down to who if either can get into a break tomorrow. Voekler really only needs to secure 4 points more than Kessiakoff today to be sure. 9th on the Port de Balès or 4th on the Col de Menté or 10th on the Peyragudes if Kessiakoff fails to score.

Yesterday Tejay van Garderen (BMC) was given the nod by Cadel Evans to race on for the White Jersey as best young rider and not come back to support the defending champion who said later that he was suffering from stomach pains. If he stays in contact or ahead of Thibaut Pinot (FDJ) who lost a little time to now be 3'48" back in that competition he should also be wearing that jersey all the way to Paris. However, Pinot along with Pierre Rolland (EUC) are both on track to be in the Top 10. If they do, after last year it will only be the second time since 2000 that more than one French cyclist has filled spots in the top 10, but with both in the early days of their careers rather than experienced men it holds the greatest hope for France to end the home Grand Tour drought since Bernhard Hinault.

And finally... today could be the day that means Bradley Wiggins takes the Maillot Jaune into the start box in last place for the Time Trial. With a Time Trailer like him that would be hard to make up by anyone, and with Fabian Cancellera nursing his new daughter and Tony Martin nursing his fractured wrist there isn't any obvious winner of the stage on Saturday so here is a good luck song from a fellow fan.
Posted by Stephen Glenn at 07:30