Is it really that time of year again that me and Nick Barlow (amongst others) give you our last look at what lies in the day ahead on the road of France (an any other country) as part of the Tour de France.

First up let's short out what happened yesterday.

The man the Dutch call the "Banana with sideburns" showed why he is the man who have spent 7 days in yellow in Paris-Nice, five in the Tour of Romandie, seven in the Critérium du Dauphiné and now 13 days in Le Tour. Let us not forget he was a rather unripe banana on the second day of this year's tour. He opened more time on everyone, even his own team mate who once again in the Time Trials came second. I suspect that these two now will go into the Olympics and after helping try and secure Mark Cavendish his gold will be going head to head with Fabian Cancellera and Tony Martin amongst others to try and lift the other men's road cycling gold on the course over many roads I have ridden a bike on around Hampton Court.

In the end Vincenzo Nibali lost more time to end up 6'19" behind Wiggo overall. Froome ended up with a Dusty Bin time of 3'21" behind his team mate. With Richie Porte coming fifth  yesterday Sky managed to half the gap between themselves and Radioshack-Nissan in the team race. But it was because they were using all their men to keep the pace high until just Froome was left with Wiggins that they despite domination of the race failed to secure the team prize, which if the aggregate of each teams best 3 riders each day. 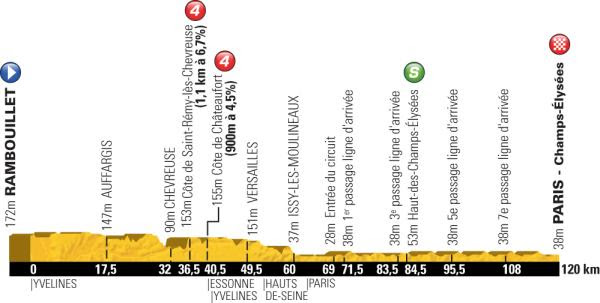 Today's final stage is usually only a ceremonial roll into Paris until the race hits the most famous Boulevard in road race cycling. The only things for certain are that the four wearers of the jerseys will be toasted with champagne. Laterne Rouge Saur- Sojasun rider Jimmy Engoulvent who is 3 hours 57 minutes slower than Wiggins will be given a red lamp to carry for the press and Wiggins with the World Champion, Nowegian Champion and other 5 remaining team mates will lead the race briefly at the start of the circuits of the Champs Élysées.

Even though the tour organisers decided to try and spice things up with two Category 4 climbs. Just in case that competition were tight heading towards Paris. As it isn't maybe the race will let Thomas Voeckler take both of those in the Polka Dot King of the Mountain Jersey, or maybe he will share the honours with Fredrik Kessiakoff with him he had a tough battle in the Pyrénées. So maybe expect the peleton to give them a point each. With not much contest, the other riding as the escort on the Côte de Saint-Rémy-lès-Chevreuse and shortly afterward the Côte de Châteaufort.

As always on the last day the intermediate sprint will occur on the third crossing of the line of the Champs Élysées. Last year it was contested as Mark Cavendish's Green Jersey was still in play. This year the peleton may well have already let a few riders get a little up the road. So they will be working to stay away and there will probably be no sprint.


Tejay van Garderen is safe in the other Jersey for best Young Rider and I fully expect to see him as leader of the BMC team when the race starts next year, maybe with Cadel Evans helping him as a super domestique.


What everyone will want to know however is can Mark Cavendish do it again. Yesterday for Cav is all about being number 1, but not in stage winning, he finished the stage in 1 hr 11 mins 11 seconds. He wants to see just one number 1 next to his name today and that is a the front rather than afterwards.

He has never lost on the last day of the Tour de France. He is already the only man to have won this famous stage three years in succession and the way he rode into Brive la Gaillarde on Friday it would be very rare to see anyone bet against him, especially as both the top two in the GC have already vowed to help lead him into prime position off the Place de la Concorde that last time into that straight that he owns. If he does it will be the seventh win by a Brit in this year's Tour from four different riders (or 1/3 of all the finishes) breaking the record of 2009 when all six were won by Cav.

Can André Greipel or Matt Goss spoil the party? Looking at the difference between the three of them on Friday and how Mark has won here in the past I'd say it looks unlikely, but you can never know.


Here is how he won in 2009, when a Brit for only the second time raced to 4th place, tomorrow that Brit should also be breaking records as he rides in for yellow.

In 2010 after Mark Renshow had been kicked off the Tour he did it himself. And rather like on Friday he left the rest of the sprinters for dead with an attack from a long way out.

Then last year when even despite having the luxury of two of his team in front of him off the last bend it has been the closest so far, because it was into a head wind.