When those two towns are at either end of a stage it can only mean one thing. The classic Pyrénée's climbs of the Col d'Aubisque, Col du Tormalet, Col d'Aspin and Col de Peyresourde. Indeed the last time those two towns were the start and finish locations was only in 2010 when the route was reversed. The winner then was Pierrick Fédrigo who won the stage into Pau before yesterday's rest day. 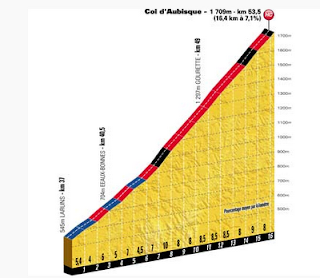 First up today is the 46th climb of the Col d'Aubisque in Tour history. Jérémy Roy climbed this first on what was an easier stage in the Pyrénees with just the one major climb on the road from Pau to Lourdes. The descent to the finish produced Thor Hushovd as a rather surprising winner of a mountain stage.

Climbed in the this direction the ascent starts as Laruns at 499m before over the next 16.4km reaching the peak at 1709m. An average gradient of 7.1%. The first steep ramp is at the Cascade de Valentin which is 13% before an 8km section of steady 8% average toward the summit. Normally I'd expect all the GC riders to stay together on this climb, but remembering how Andy Schleck went out to attack on stage 18 last year you cannot tell. Vincenzo Nibali and Cadel Evans both need a big chunk of time somewhere over the next two days. Will either of them be brave enough to go alone from a long way out, even from the first climb? 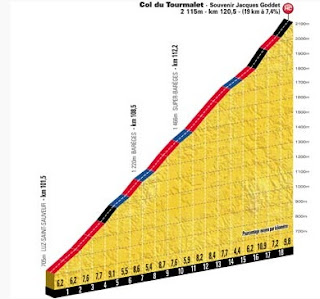 Next up is the Col du Tourmalet with the €5000 Souvenir Jacques Goddet for the climber who reaches the summit first.

Last year Jérémy Roy was again in the lead over this famous Col, and it appeared as if Geraint Thomas wasn't aware of the prize money at the top as he didn't contest for it. This is the 79th time that the Tour has visited Tourmalet the most of any mountain.

In 2010 when Pierrick Fédrigo won this stage in reverse Christophe Moreau reached the summit first. There are a number of easing sections on this long climb with a ramp about 3km from the summit. Depending on how the GC riders are racing today either Sky will be riding a tempo of possibly Nibali (most likely) will be trying to get away and both Sky and BMC riders will be working to keep Bradley Wiggins and Evans in pursuit. 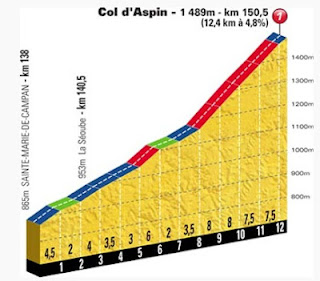 After the decsent to Sainte Marie de Campan it is straight into the climb of the Col d'Aspin.

Of all today;s climbs this is the easiest, but that still makes it a Category 1. There is 570m of ascent to the 1489 summit spread over 12.4km at a mere 4.8% gradient. It is unlikely to be a climb that will put any of the GC contenders into difficulty so I'd expect them, if they are together here, to ride this together.

The 6% gradient of the descent over 12km on the other side might however be an opportunity for Nibali to try and get ahead if he has not tried already before the start of the final climb of the day. 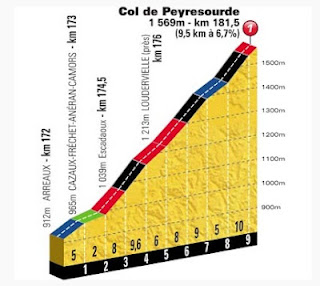 Which leads us into the Col de Peyresourde which is being climbs from its toughest direction unlike the Col d'Aspin.

The climb from Arreaux is 9.5km at an average of 6.7% but there are three distinct steep sections on the way including the final one 1.5km from the end.

If Wiggins, Evans and Nibali are still together here I'd expect one of the latter two to have to try and do something here on one of the ramps. They will have to try and put in an explosive burst when the road goes sharply uphill to try and test the Maillot Jaune. If Wiggins still has Richie Porte and Michael Rogers with him at the start of this climb alongside Chris Froome the other two are going to find it tough. Which is why I suspect they might have tried something on the Tourmalet to reduce the amount of support riding with the yellow jersey. Even if it is left to just Froome and Wiggins it may well still be too late.

However, after the summit there are 937m of descent at an average of 6.1% though some sections do reach 9.8% in which they might be able to open up some time over Wiggins.

If Wiggins gets to the line marking both Evans and Nibali there is just one more day for fireworks on the Pryénées tomorrow. I do expect someone however to test the post rest day legs of Wiggins and his team today and not to let them settle into their routine of riding tempo for everyone from the start.
Posted by Stephen Glenn at 07:52