Yesterday's stage did see a break away, and then saw Michael Morkov trying to honour his father who had died five years before try to break away from that. But the 9% short climb of the Mont Saint Clair was what decided just how this race would turn out.

On that short climb three things happened, the escapees were all caught, many of the sprinters were dropped, plus the GC contenders were racing. It was Jurgen van den Broeck (LOT) who made a move on the slopes to be pursued by Cadel Evans (BMC). When the rest of his team didn't seem able to respond the Maillot Jaune did the pulling back of that duo himself. With the race split up with 23km to go the leading group were going to be racing flat out. Lotto Belisol took up the pace at the front, but Alexandre Vinokourov (AST) and Michael Albasini (OGE) managed to get ahead of the group with the cross winds.

Lotto kept up their pursuit because André Greipel was still there but was marked by the Green Jersey of Peter Sagan (LIQ). The pursuit was so intense that the main group developed a split in the winds. Although in the lead group were Sky's Bradley Wiggins, Chris Froome and Edvald Boasson Hagen, the GC contenders Evans, van den Broeck and Vincenzo Nibali (LIQ), as well as Sagan and Greipel.

After over 12km in the front eventually Albasini and Vinokourov were captured 2.5km from the end. But then Leon Luis Sanchez (RAB) made a bid for the line he was joined by Matthieu Sprick (ARS) behind them now the yellow jersey was at the front of the race. Coming into the final bend 300m from the end it was the Maillot Jaune that brought them back together but was doing more than that he was leading out his team mate Boasson Hagen.

With less than 200m left Wiggins pulled over but had to keep pedaling to keep safe, he ended up finishing 12th. But Edvald couldn't hold off Greipel and Sagan. The two of them came past in the final metres and Griepel took the line from Sagan. In the process overtaking Goss in the contest for the Green Jersey, but Sagan looks almost set to win that providing he gets to Paris. 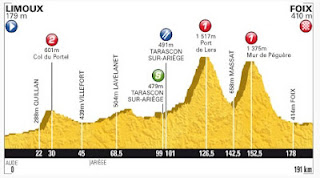 Today's stage takes us into the Pyrénées with two 1st Category climbs of the Port de Lers and Mur de Péguère.


The Port de Lers is being taken from a different approach than in its three previous appearances since 1995. The approach from Vicdessos is harder though shorter than the approach from the other side. At 11.5km the climb of only 805m at 7% is shorter and sharper than the other slope. It has raised the category of this climb to a 1st Category. 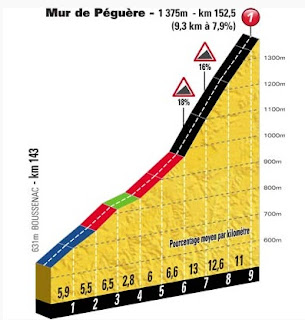 But after a 16km descent we come upon the even tougher Mur de Péguère. It may be shorter than the Port de Lers at only 9.3km but the average gradient is 7.9% and the last 3.5km really ramps up including two ramps of 18% and 16%.


It was due to debut in 1973 from the Foix side but the riders protested that the descent, today's ascent was too dangerous. The road has since then been resurfaced and in 2008 the col was crossed as part of the descent from the Col de Portel but was not categorised.

Today with 38.5km descending to the Foix at the end might see an attack from someone who can descend well like Vincenzo Nibali or Cadel Evans. If they use an explosive turn of speed at the right point they might be able to break the elastic to the way Bradley Wiggins likes to climb. The question of course is how much do either of those two have in the tank. There has just been one real rest day for the mountain legs, stage 12's gentle roll after two peaks not withstanding.

So Wiggins and his Sky Team will have to be alert I think towards the end of this stage as Nibali and Evans will try and gain back any time that they are capable of. Tomorrow's stage isn't that severe before Tuesday's final rest day in Pau before two more days in the Pyrénées. This may been seen as some as a chance to attack knowing there is time to recover.

Bradley today sets a new British record simply by turning up at the start line. He will surpass Chris Boardman's record for most days in the Maillot Jaune. The fact that Boardman did it over 3 Tours and Wiggins only took it off the departed Fabian Cancellera now the proud father of Elina born on Friday. Jean Christophe Peraud who came second to David Millar in that stage on Friday also became a father to a new daughter yesterday. Although he was on the road racing when Valentine was born.
Posted by Stephen Glenn at 09:24