So the first mountain day and British riders ended up in two of the prestigious jerseys of the Tour. With Chris Froome taking his first Tour stage win came the 20 points and lead in the King of the Mountains competition. Two seconds back where the two big favourites Cadel Evans and the man who would slip into the Maillot Jaune Bradley Wiggins. Wiggins 10 second prologue advantage all that splits the two.

There may have been a breakaway of seven riders up the road at one point, but when it came to the slopes of La Planche des Belles Filles it was the black and blue colours of Team Sky that did all the work, pulling them back and then the leaders up the slopes. First Edvald Boasson Hagen, then Mick Rogers and Richie Porte before in the final mix up of five there was Chris Froome and Bradley Wiggins. Indeed at one point on the climb those last four named were in a group of eleven and not a single other rider had a team mate present. Cadel Evan's BMC team was decimated and only he rode on alone. Vincenzo Nibali of Liquigas-Cannondale who has said "Wiggins doesn't impress me. I'm better than him." ended up losing 5 seconds on the day unable to keep up with Froome, Evans and Wiggins on the final kick.

Frank Schleck who was left on the earlier slopes did find his legs again riding up with his Radioshack-Nissan team mate Maxime Monfort. But still ended up in 12th 1'09" back, only 5 seconds ahead of the second of Wiggins mountain domestiques Porte, who was a further 10 ahead of another Rogers. The Estonian young rider Rein Taaramae did impress as the fifth of that final group. He starts in white today having finished just 19 seconds back from Froome.

Overall in 4th place now behind Wiggins, Evans, Nibali and Taaramae is Denis Menchov who came 9th on the day losing 48 seconds on the top two 54" back. Then it is two of Schelck's team mates Haimar Zubeldia and Monfort at 59" and 1'09". Ireland's Nicolas Roche is next for AG2R-La Mondiale at 1'22", then the other two Sky boys Froome and Rogers round out the top 10. The man who has worn yellow since Liege, Fabian Cancellera is next. 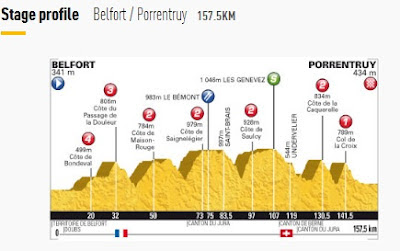 The first, a Category 4, the Côte de Bondeval will seem like nothing by the end of the day but happens after just 20 km. It is swiftly followed by the Côte du Passage de la Douleur which is a shorter but steeper Category 3 climb at 32km.


There then follow four category 2 climbs. Côte de Maison-Rouge at 50km 7.9km long with gradient average of 5%, before descending into Switzerland then Côte de Saignelégier at 73km 7.8km at 6.1% then Côte de Saulcy only 4.6km long but at 8.6% though reaching over 10% at 5 points along the ascent including 2 at 14%, the latter near the summit. Before you get to the last category 2 climb there is the small matter of the intermediate sprint at Les Genevev, don't expect to see any of the Green Jersey leaders up there to contest those points though. The Tour then descends for about 23km before climbing the final category 2 Côte de la Caquerelle at 130.5km it measures 4.3km but has a gradient of 7.6%

A swift descent of that and then it is back to climbing straight away for the final peak of the day Col de la Croix it may be only 3.7km of climbing to its 789m summit but there is a real sting in the tail as it ramps up to as much as 17%. The average gradient is 9.2% so once again expect to see the GC contenders up here. But judging on yesterday's form Team Sky will be doing all they can to break them down. Once at the top though there is 16km of downhill road to get to the finish of the stage. So anything could happen as the road twists down towards the valley below.


With 5 points on offer for each 2nd Category climb, plus the three for the first two climbs of the day it is possible that a rider in the breakaway could take away Froome's Polka Dot Jersey if they win them all. It is however, unlikely that the breakaway would be the ones to take the honours on the final climb and claim its 10 points top prize. So it will be interesting to see how the summits are contested today. If Evans is really to be able to contest his defense of the title his team may well have to offer some challenge to Team Sky which they failed to do yesterday, or he may have to try and do something himself, if not today at some other point in the mountains.
Posted by Stephen Glenn at 09:52