For almost three weeks of this Tour, since stage there has been one man whose name has been on the tip of cycling fans lips just waiting to get out. A sprinter. A world champion. A phenomenal force in the Tour de France.

Here is a picture of him in action crossing the line well ahead of the rest of the field. 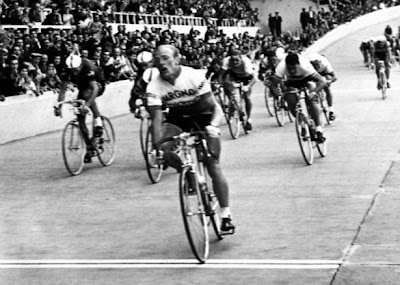 The man's name is André Darrigade and he is an 83 year old, French, former sprint cyclist. He was born in Narrosse which is 355km from the end of yesterday's 235km stage finish and was the sort of length that he was accustomed to riding in a day on the Tour de France.

The reason he was on the tips of everyone's tongue was because he held a certain record. The most stage wins by a sprinter in the Tour, set between 1953 and 1964. Yesterday after a 16 stage drought, which for him is a record itself, Mark Cavendish finally crossed the line in first again. There had been a break up the road that had finally been pulled back in the last km, but two of the counter attack Luis Leon Sanchez and Nicolas Roche had looked like they might just stay away. But the power and sheer speed of the Manx Missile destroyed everyone. Matt Goss did come in second but several bike lengths down just edging out Peter Sagan, Sanchez and Roche, the last two having free wheeled from when they fought the sprint had enveloped them. The fact was it was only one rider and if they had pedaled on they would have come second and third.

The last three in Cav's lead out today were Chris Froome, Bradley Wiggins and Edvald Boasson Hagen, who had been in the breakaway but stayed with it to take the Manxman to the 600-500m to go. The distance with which he beat his rival ranks up there with the 2009 finish on the Champs-Élysées when his own lead out man Mark Renshaw had coasted in for second. But the way with which he did it is certainly one of his best solo efforts from so far out. He seemed to catch the other sprinters with lead lined legs when he opened up the sprint first in pursuit of the front two, and then in pursuit of a little bit of history in equaling Darrigade's record for a sprinter.

There is also the small matter that his 22 stage wins now also equals Lance Armstrong. Cavendish will have to wait at least until nest year to equal the next most winning rider André Leducq who took 25 stages in a career that saw him winning the Tour in 1930 and 32.

Today's stage of 53.5km is a flat time trial stage, but a long time trial at the end of a Tour of such intensity may have untold effects on the legs of riders.

That being said the way Bradley Wiggins pulled in the final remnants of the day's breakaway yesterday would suggest that he still has the legs. He'll start the day as favourite to give Britain its sixth stage win of this Tour, putting us back ahead of the French. With Fabian Cancellera and Tony Martin both out of the Tour, the only person who may challenge him for the stage win would appear to be Chris Froome who came second in this year's other long time trial to Besançon. We shall know by the first time check at 14km if anyone else is anywhere close.

Today's stage as well as being on ITV4 where you would expect to see it is also simulcasting on ITV1, the same applies to tomorrow's finish in Paris.

Yesterday another jersey's final destination was finally put beyond doubt when Peter Sagan crossed the line in third place. His lead in the Green points leaders jersey is now unassailable so along with Thomas Voeckler as King of Mountains nothing can change there.
Posted by Stephen Glenn at 06:57