Well the script for this tour didn't have any twists in the tail. With a little over 10km to go there was a group of three with a 20 seconds lead over the peleton, but slowly but surely they got pulled back. At times Chris Froome the man who is second in the GC was leading the peleton to pull it back. As we crossed by the finish line on the other side of the Champs Élysées they were captured and Team Sky were riding back at the front of this Tour.

Under the tunnel it was Saxo-Bank who lead for the last time but just behind them was the Maillot Jaune, followed by the Norwegian Champion and World Champion. Out of the tunnel and take Norway Corner into Rue de Rivoli then something unusual if not unique happened the Maillot Jaune hit the front with a km to go. He led all the way into the Place de la Concorde until the left hand bend. With a flick of his elbow it was over to Edvald Boasson Hagen who powered on to the right hander entering the Champs Elysées. No sooner were they on it today that there was a missile launch.

The Manx Missile zoomed off down the cobbles almost before anyone else had taken the corner. The rest of the world top sprinters tried to catch up but for the fourth year in a row once the Missile was launched there was no abort and no mistake and nobody even got within a bike length. He crossed the line in the Rainbow Jersey ahead of the Green Jersey in second and Matt Goss with yet another top three finish but without a win. 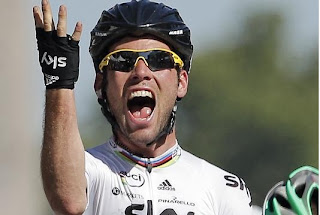 Lesley Garrett sang the national anthem in what looked like one of her last night of the Proms dresses. Then all that was left was for Bradley to draw the raffle numbers from the winners podium and wish all the fans a safe journey home and not to get too drunk. Yeah it was a winners acceptance speech that only a Brit and probably only Brad could make. But as he said some dreams do come true and now his old mum's son has won the Tour de France.

What a Tour! What a result for Britain!

We now have a short intermission before many of these guys leave from The Mall to head over Box Hill again and again before returning to The Mall for the first Gold Medal of London 2012.

Will the man who won this Sunday be doing the same off the Victoria Monument next Saturday?

Just for the record


King of the Mountains