Yesterday was the toughest mountain stage is this year's Tour and you could see it as everyone of the top contenders suffered at least for some part of it.

Early on a large break got up the road, with the first slope the Col de la Madeleine starting just 14.5km from the start of the race they wanted away. Liquigas, BMC and Radioshack were amongst the teams they put men into a 31 men breakaway in the hope that these men would be able to help Nibali, Evans and Zubeldia respectively when the going got tough later on. It meant that Sky were forced to ride at tempo on the front from the early part of the race something that they looked set to have to do all day to defend the Maillot Jaune. One of the first riders to exit the back of the peleton was Mark Cavendish along with Bernie Eisel therefore meaning that Sky would only have 5 men at the front to help Bradley Wiggins. At the start of the day the only other man to have worn yellow in this Tour, Fabian Cancellera, did not start, returning to Switzerland to be with his wife who is about to give birth.

In the lead group lost and gained members on the slope of the Madeleine but in it were a number of riders who wouldn't normally be allowed to go like Robert Gesink (RAB) Vino Vinokourov (AST), Ivan Basso (LIQ), Michele Scarponi (LAM) Levi Leipheimer (OPQ) and Dan Martin (GRS) but because of time they had already lost they were not a real threat to the GC contenders. Also up the road were riders like Pierre Rolland (EUC) who last year won year on Alpe d'Huez, Frederik Keesiakoff (AST) who had lost the King of the Mountains to Rolland's team mate Thomas Voeckler the day before, Chris Anke Sorensen (STB) who is always a danger in a break in the Mountains.

At the top of the Col de la Madeleine Peter Velits (OPQ) took the maximum points but Kessiakoff going over second gave him the virtual lead in the KoM's once again. The Yellow Jersey Group reached the summit 2'55" after but Peter Sagan and Daniel Oss (LIQ) sprung from that group just before the summit, possibly in an attempt to get back to the lead group before the intermediate sprint in the valley below. In the end this attempt was no successful and Sagan failed to get there and rejoined that group before getting to the sprint point without adding to this points tally in the Green Jersey competition.

On the second climb the Col de la Croix de Fer there was a group of eight at the front Rolland, Alejandro Valverde & Vasili Kiryenka (MOV), Velits, Kessiakoff and team mate Kirserlovski, Yury Trofimov (KAT) but there were stragglers in the 3 minute gap back to the yellow jersey. Before some more including Leipheimer, Amael Moinard (BMC), Scarponi and Vinokourov got back onto their group on the ascent. Christophe Kern also got back into the lead group and he started to set the pace for his team mate Rolland.

About half way up the long climb however, Teejay van Garderen (BMC) made a break from the Wiggins Group followed a couple of minutes later by his team leader Cadel Evans. Wiggins still had Michael Rogers, Richie Porte and Chris Froome around him for protection and he asked Rogers to up the pace. Just up the road the BMC pair had got to the wheel of Moinard and so it became BMC v Sky in a team pursuit on a mountainside. Sky though didn't panic but over next mile or so whittled down what was a very big peleton into a select group. While up the road Evans showed the first signs that his legs weren't able to keep up with Teejay.

At the top there is a photo finish for the King of the Mountians points as Rolland and Kessiakoff battle it out. The former is initially given it, then the latter is accused of using his elbows as a reason why he is denied, before finally being awarded the points. There is the matter of the Henri Legrande Prix on offer for the highest pass of this year's Tour so €5000 is not to be sniffed at, nor the extra points for the KoM.

After going over the Col du Mollard with no major incident to report all the groups continued their descent to the final climb of the day to the ski station at La Toussuire. The lead group is now down to just four Rolland,  Sorensen,  Kiserlovski, and Kiryenka. Sorensen would continue to drop off and get back on all the way up the climb. Behind them first Brajkovic, then van den Broeck attack off the Wiggins Group. Nibali waited to see if anyone followed before going after them himself. Chris Froome is the only support that Wiggins has left and he starts the work of clawing it back. 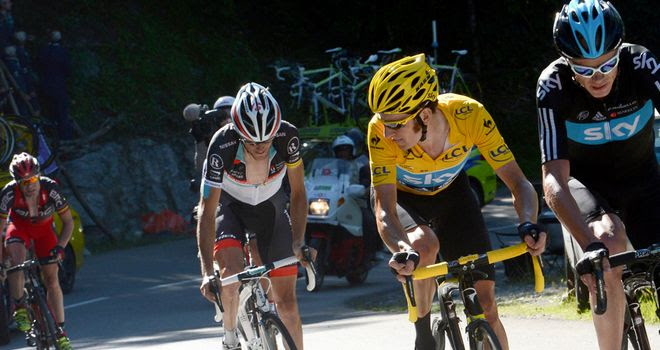 Up front Rolland makes a solo move to break away from the lead group, but there is still over 10km to go. Froome brings Wiggins up to Nibali and van den Broeck, this time it is Nibali's turn to stare at Wiggins who just looks ahead at the wheel of this team mate. However, shortly after that Froome appears to fade to the back of the group where he finds himself on the wheel of Frank Schleck! But he holds on. Meanwhile Nibali strikes out again and quickly catches Pinot and Brajkovic up the road. Wiggins it is who starts to close Nibali down, then Froome appears to have found his legs once more and returns to the front, Schleck and van Garderen going with the pace but Evans is struggling. A look over the shoulder from Tejay van Garderen confirms that his work is to help pace the defending champion his team mate to the finish.

The trio of men who have podiumed in Grand Tour Wiggins, Froome and Schleck did pull themselves back to Nibali, Pinot and Brajkovic and then Froome goes through the group to the front taking Pinot with him but it is too much for Wiggins! Froome's acceleration lead to Wiggins getting dropped off the wheel of Nibali. So after a conversation in his radio Froome sits up.

There are no more moves for today behind Rolland ride Wiggins, Froome, Nibali, van den Broeck and Pinot. Rolland takes his second Alpine stage in the Tour remaining 55 seconds clear at the end. Within sight of the line Froome was given his wings to open up a few seconds on Nibali who was now virtural third on the road, but Thibaut Pinot was having none of it and chased him down for a French 1-2. But there were also a British one two as historically Froome was now in second place in the race behind his team leader.

As Wiggins and Nibali crossed the line together was was a mutual sign of respect after what they had gone through and how both men had gone about the job they had had to do.

Kessiakoff returned the Polka Dots, Rolland took the combative prize as well as the stage win. Van Garderen remains in the White Jersey but is now contesting that with Pinot who 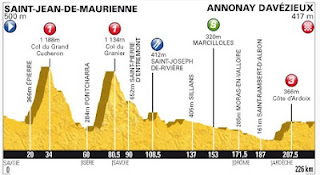 Today's stage is the last Alpine one and there are two category 1 climbs on the road to Annonay Davézieux. However they are both in the first 80km of a 226km stage. So there is unlikely to be any move from any GC contender. But Kessiakoff and Rolland may try to battle it out for King of the Mountains points. Peter Sagan also may try and get himself into a breakaway as it is unlikely that most of the sprinters are capable of getting over the two climbs before the long race to the line so a break away might just stay away at least as far as the intermediate sprint if not the whole way.